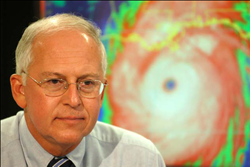 Max Mayfield is currently the Hurricane Specialist at WPLG-TV in Miami, a position he accepted after a distinguished 34-year career of service at the National Oceanic and Atmospheric Administration's (NOAA) National Hurricane Center (NHC). He was the NHC Director from 2000 to 2007 including the active Atlantic hurricane seasons of 2004 and 2005. He received a Presidential Rank Award for Meritorious Service from President George W. Bush in 2005 and was named ABC Television Networ's "Person of the Week" after 2005 Hurricane Katrina. Mr. Mayfield earned a M.S. in Meteorology from Florida State University and served as a weather forecaster in the United States Air Force after receiving a B.S. in Mathematics from the University of Oklahoma. In 2006 he received the Government Communicator of the Year Award from the National Association of Government Communicators, as well as the prestigious Neil Frank Award from the 2006 National Hurricane Conference "for…efforts to significantly improve the accuracy of hurricane forecasting…as Director of the National Hurricane Center, a factor which has undoubtedly helped save countless lives and property." The National Academy of Television Arts and Sciences' Suncoast Chapter has recognized Mr. Mayfield with six Emmy Awards, and he was named the Federal Alliance for Safe Homes' 2015 National Weatherperson of the Year. As former director of NOAA's National Hurricane Center he played a key role in forecast and service improvements during his public service career.