The Vancouver Island School-Based Weather Station network consists of more than 150 weather stations located principally on schools on southern Vancouver Island as well as the Gulf Islands in the Strait of Georgia, British Columbia, Canada. The Capital Regional District (Greater Victoria) is the most densely monitored part of our network. It includes 13 municipalities, covers an area of 2300 square kilometres, and contains 105 weather stations in urban, agricultural and natural areas. Several other urban centres and remote sites are also monitored on southern Vancouver Island. Most of the weather stations have been in operation for ten years or less but the oldest station has been collecting data for 15 years. Minute resolution data is collected from each station and then broadcast back to the community through the website www.victoriaweather.ca where various tools are available to view maps and charts of the measured fields in near real-time and to retrieve subsets of the data. Close to 7.5 billion observations are now stored in the database and are available online for use by anyone. Apps for iOS and Android devices have been developed and are available for free through each system's app store.

The initial motivation for the network was educational. We wanted to raise the profile of meteorology, climate, and climate change in the British Columbia K-12 curriculum and demonstrate to students and teachers that physics, through meteorology, has great practical importance. As the network grew, interest and awareness within the community also grew. Numerous applications of the weather station data for scientific, engineering and media purposes have emerged. Finally, this project has given us the opportunity for outreach. We've been able to interact with thousands of students who travel to UVic or who invite us into their classrooms. In a very real sense for this project, observations lead the way. 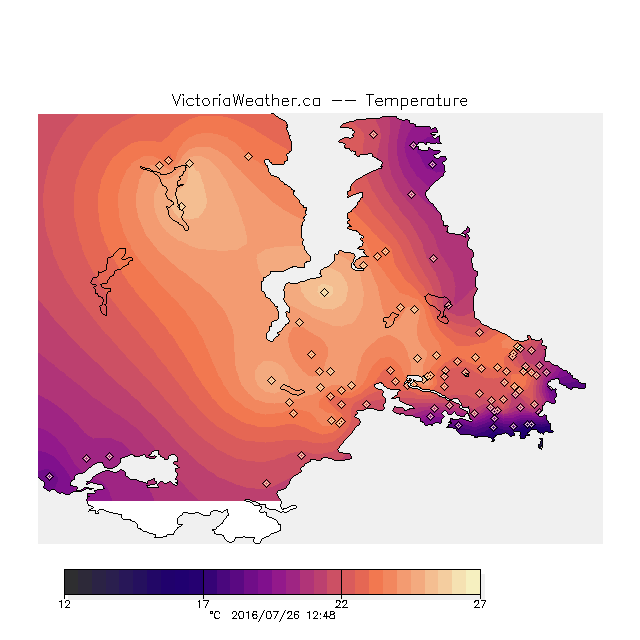