More
4E (Washington State Convention Center )
Nancy L. Baker, NRL, Monterey, CA; and I. M. Smelser, L. Xu, C. M. Amerault, E. A. Satterfield, and B. S. Chua
From Dec. 10 to Dec. 13, 2014, a powerful winter storm swept across the western US coastal states bringing widespread power outages, numerous downed trees and power lines, heavy rains, flooding and even a tornado in the Los Angeles basin.  This windstorm was the strongest since Oct. 2009, and was similar to classic wind storms such as the 1962 Columbus Day Storm (Read, 2015).

The storm started developing over the Pacific Ocean north of Hawaii on Nov. 30, and formed an atmospheric river that eventually stretched from Hawaii to the west coast. The storm initially hit the Pacific Northwest on Dec. 9th and then split. The highest precipitation amounts started in British Colombia and moved south along the coast. By the Dec. 11th, the highest precipitation amounts were near San Francisco (CA). The peak wind gust (14.4 ms-1) for Monterey (CA) occurred at 1116Z on Dec. 11th while the heaviest 6-hr precipitation (42.9 mm) occurred between 18Z on Dec. 11th to 00Z on Dec. 12th. By Dec. 12th, the storm was centered over Southern California.

To study this extreme weather event, we used the Navy global (NAVGEM) and mesoscale (COAMPS®) NWP models, and compared the resulting forecasts to observations, satellite imagery and ECMWF (TIGGE) forecasts.  NAVGEM, with Hybrid 4DVar, was run with a ~ 31 km resolution, and generated the boundary conditions for COAMPS® 4DVar and forecasts, that were run with triple-nested grids of 27, 9, and 3 km.

MesoWest data from the University of Utah were used for forecast verification, and to locate the times and locations of highest precipitation and wind speed along the coast. Both the online API and the python module were used to access and pull information from the data base. 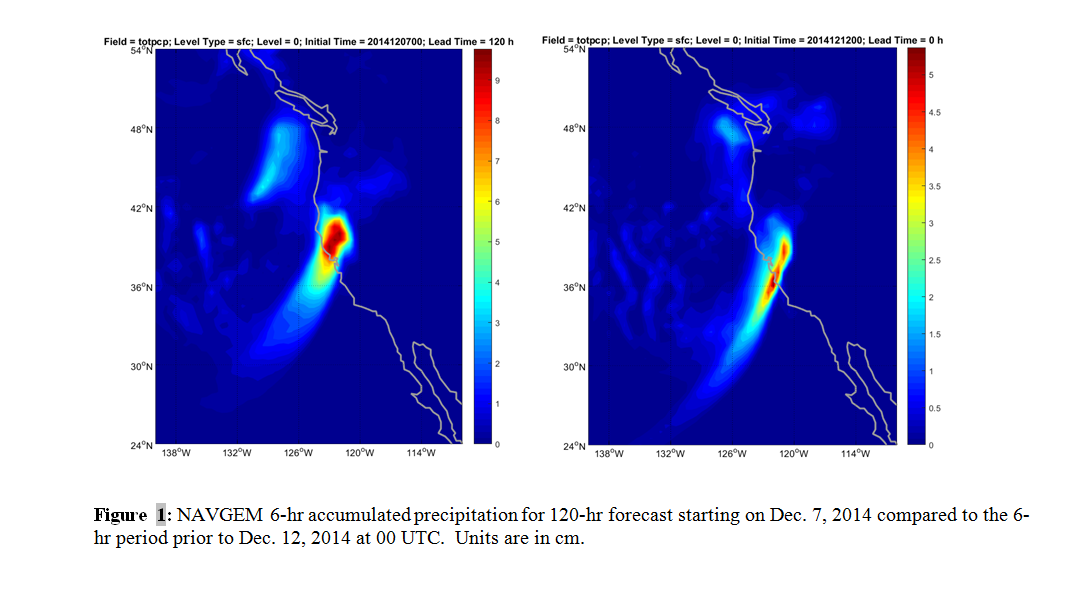