More
4E (Washington State Convention Center )
Xubin ZHANG, Institute of Tropical and Marine Meteorology, CMA, Guangzhou, China
To improve the prediction of heavy rainfall in southern China during the prerainy season, horizontal wind data from wind profiling radars (WPRs) were assimilated in the partial-cycle data assimilation (DA) system based on a three-dimensional variational method. The analyses from the DA system are used as initial conditions for the convection-permitting Global/Regional Assimilation and Prediction System (GRAPES) model. The impact of assimilating WPR data on the quantitative precipitation forecast (QPF) in southern China was evaluated over the period of the Southern China Monsoon Rainfall Experiment (SCMREX) in May 2014, by comparing the results of a control experiment with WPR data assimilated and a denial experiment without WPR data.

The positive impact of WPR DA was significant on the forecasts of atmospheric variables in the vertical and diagnostic fields at the surface, especially those of surface wind fields in the 0–6-h range. The inclusion of WPR data also improved the QPF skill of light and heavy rainfall throughout the 12-h forecast period by reducing the predicted spurious precipitation (thereby alleviating overestimations and false alarms), with the largest improvement in 6-h heavy rainfall forecasts. WPR DA considerably alleviated the spinup problem, remarkably improving the QPF of heavy rainfall (especially extreme rainfall). The improved representation of wind and moisture at lower levels in the analyses due to WPR DA was the physical cause of the QPF improvement, as is illustrated using a case study. 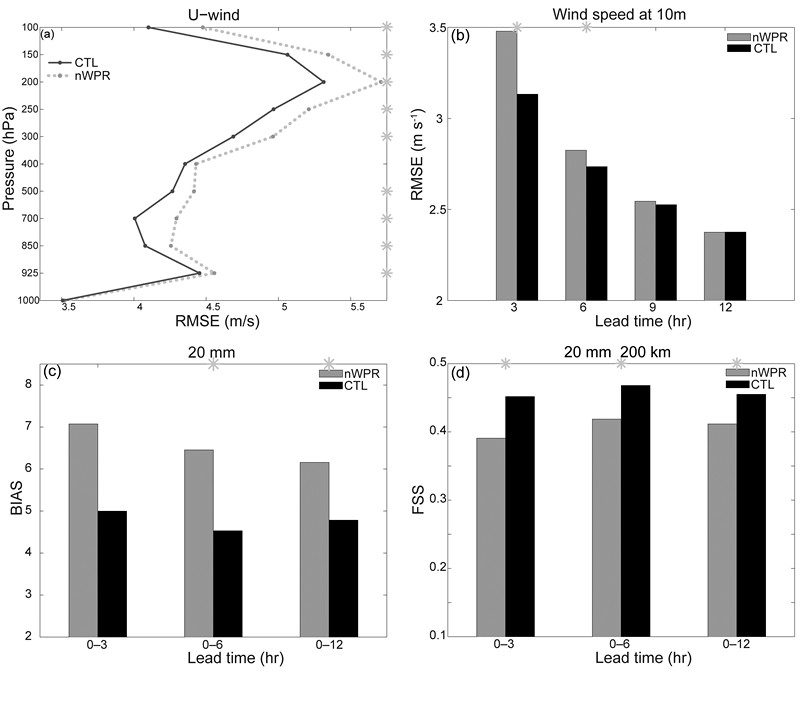