More
4E (Washington State Convention Center )
Nicholas Antonio Gasperoni, CAPS/Univ. of Oklahoma, Norman, OK; and X. Wang
A nationwide “Network of Networks” initiative identified the increasing need for mesoscale coverage of observations to continue advancement towards accurate convective-scale resolution forecasts. As part of this effort, a research testbed known as the Dallas – Fort Worth (DFW) Urban Testbed has been created to experiment with many kinds of observations from both government and private sector providers that could be used in a data assimilation system. The goal is to identify observational systems that are most impactful on forecasts. Many observation systems have been implemented for the DFW testbed, including X-band radars from the Center for Collaborative Sensing of the Atmosphere (CASA), Earth Networks Weather Bug surface stations, surface stations from the Citizen Weather Observer Program (CWOP), observations from Global Science and Technology (GST) trucks, SODARs, and Earth Networks radiometers. These “non-conventional” observations are combined with operational data from METARs, mesonet, aircraft, rawindsondes, profilers, and operational radars to form the testbed network.

In this study, the GSI-based EnKF data assimilation system is used together with the WRF-ARW core model to examine the impacts of observations assimilated for the 3 April 2014 case. On that day, two rounds of supercells initiate in Wise County, Texas, within the NW portion of the testbed domain along a NE-SW oriented dryline. The storms advance ENE within the northern part of the testbed domain, producing large hail and a few tornadoes. Data denial experiments are conducted testing the impact of high-frequency (5-min) assimilation of nonconventional data on the timing and location of the initiation of these supercells, as well as their development as they progress through the testbed domain. Data denial experiments focus in particular on relative impacts of observations from GST transportation fleets as well as amateur surface stations from CWOP and Earth Networks Weather Bug stations. The non-conventional observations offer opportunities to fill in areas where conventional observations are lacking near areas of storm initiation. These observations also provide a higher resolution snapshot along and just ahead of the dryline within the DFW domain. Experiments include the assimilation of radar reflectivity and radial velocity data from the WSR-88D network, as implemented by Johnson et al. (2015) within the GSI-based EnKF system. The purpose of radar assimilation is to capture pre-existing convection in the domain and to deter spurious convective growth.  Results of these data denial experiments will be compared with the Ensemble-based Forecast Sensitivity to Observations (EFSO) metric (Kalnay et al. 2012; Gasperoni and Wang 2015). The EFSO metric is appealing because no adjoint or additional experiments are necessary to evaluate impacts from several different observing platforms. 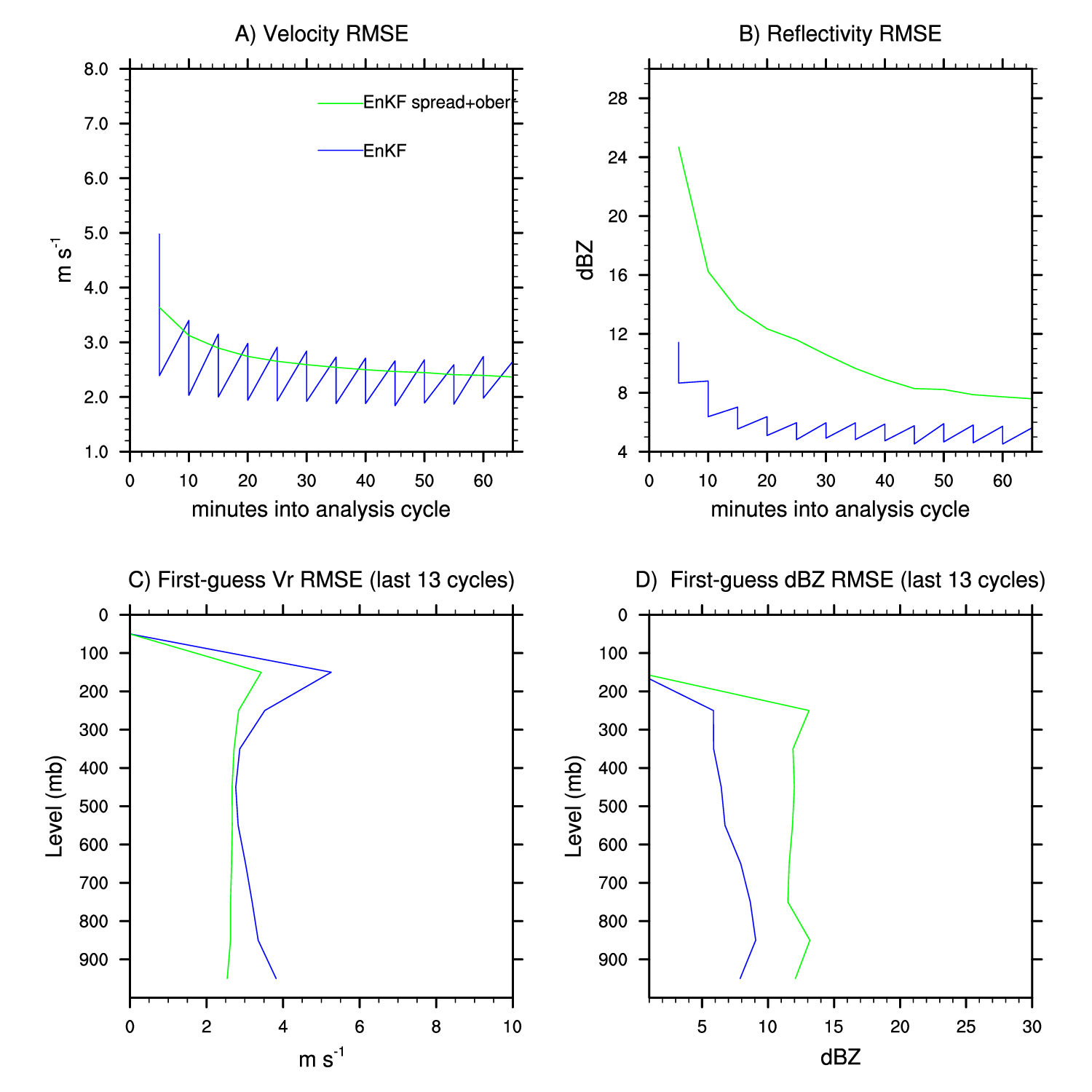