5B.5 Response of Summer Sea Ice in the Beaufort-Chukchi Seas to Interannual Variations in the Atmospheric Pacific-Arctic Dipole in the Spring

More
Constellation F (Hyatt Regency Baltimore)
Minghong Zhang, Bedford Institute of Oceanography, Dartmouth, Canada; and W. Perrie and Z. Long
Arctic sea ice has been rapidly decreasing over the past three decades. Due to social and economic interests in the Arctic, the rapid retreat of summer ice has led to increased demands for forecasts of sea ice conditions on seasonal to interannual time scales. Increased internal variability has played an important role in several record-breaking minima of sea ice cover over the last decade, particularly due to factors such as decreased ice thickness. The increased internal variability complicates the prospects for improved forecast skill for near-term ice forecasts. A better understanding of the internal variations in Arctic sea ice is becoming increasingly important for both seasonal predictions and longer time-scale future Arctic climate projections.

In our study, we focus on the regional summer sea ice over the Beaufort-Chukchi Sea, which has recently experienced its greatest decline over the last several decades. First, we identify an atmospheric dipole in the Pacific-Arctic sector (PAD) in spring and then we investigate its impacts on the following summer sea ice in the Beaufort-Chukchi Sea. These results are obtained using sea ice observations, model-generated data from PIOMAS (Pan-Arctic Ice-Ocean Modeling and Assimilation System), and the European Centre for Medium-Range Weather Forecasts (ECMWF) Re-Analysis. PAD is defined as the second EOF mode of the monthly sea level pressure in the Pacific-Arctic region (Figure 1a). A positive PAD mode has a positive anomaly in the Beaufort Sea and a negative anomaly extending from East Siberia to the northwestern region of North America. Positive PAD is indicative of an atmospheric mass oscillation between the western Arctic Ocean and the surrounding sub-polar region. In addition, a positive PAD mode is associated with decreased cyclone activity in the Beaufort Sea region and increasedcyclone activity in the sub-polar region (Figures 1b-1c). Our results suggest that PAD reflects the re-distribution of cyclones due to the modulation of the upper atmospheric circulation in the Pacific-Arctic region. We find that the spring PAD can account for about 16% of the internal variability of the September sea ice concentration (SIC) in the Beaufort-Chukchi Seas (Figure 2) and also leads to the occurrence of earlier sea ice retreat in the Beaufort Sea by as much as two weeks (Figure 3c). Summer SIC in the Beaufort Sea tends to decrease (increase) during the positive (negative) PAD, as experienced in the previous spring (Figure 2). Moreover, in the positive PAD years, the ice retreats approximately in June and July (Figure 3a), whereas in the negative PAD years the retreat of ice tends to occur near the end of July and August (Figure 3b). Therefore, PAD can act as a potential indicator for sea ice retreat. During a positive PAD, the Beaufort High and the Low in the surrounding sub-polar regions tend to be strong, and the intensified easterly winds in the Beaufort Sea tend to enhance ice advection and reduce sea ice thickness. Due to reduced cloud cover and water content associated with fewer cyclones in the Beaufort-Chukchi Seas, the increased solar radiation further accelerates ice melting. Thinner springtime ice fosters a stronger summer ice-albedo feedback resulting in accelerated summer ice melting.

Figure 2 The regression of sea ice concentration (SIC) in subsequent Septembers from the NSIDC (a) and PIOMAS (b) datasets against the PAD index; (c) Time series showing the PAD index (black), and September sea ice area (unit: km2x106) over the Beaufort-Chukchi Seas (700N-800N, 1800E-2400E) derived from NSIDC (red) and PIOMAS (blue); (d) lagged correlation between NSIDC sea ice area (SIA, red) over the Beaufort-Chukchi Seas and the PAD index. 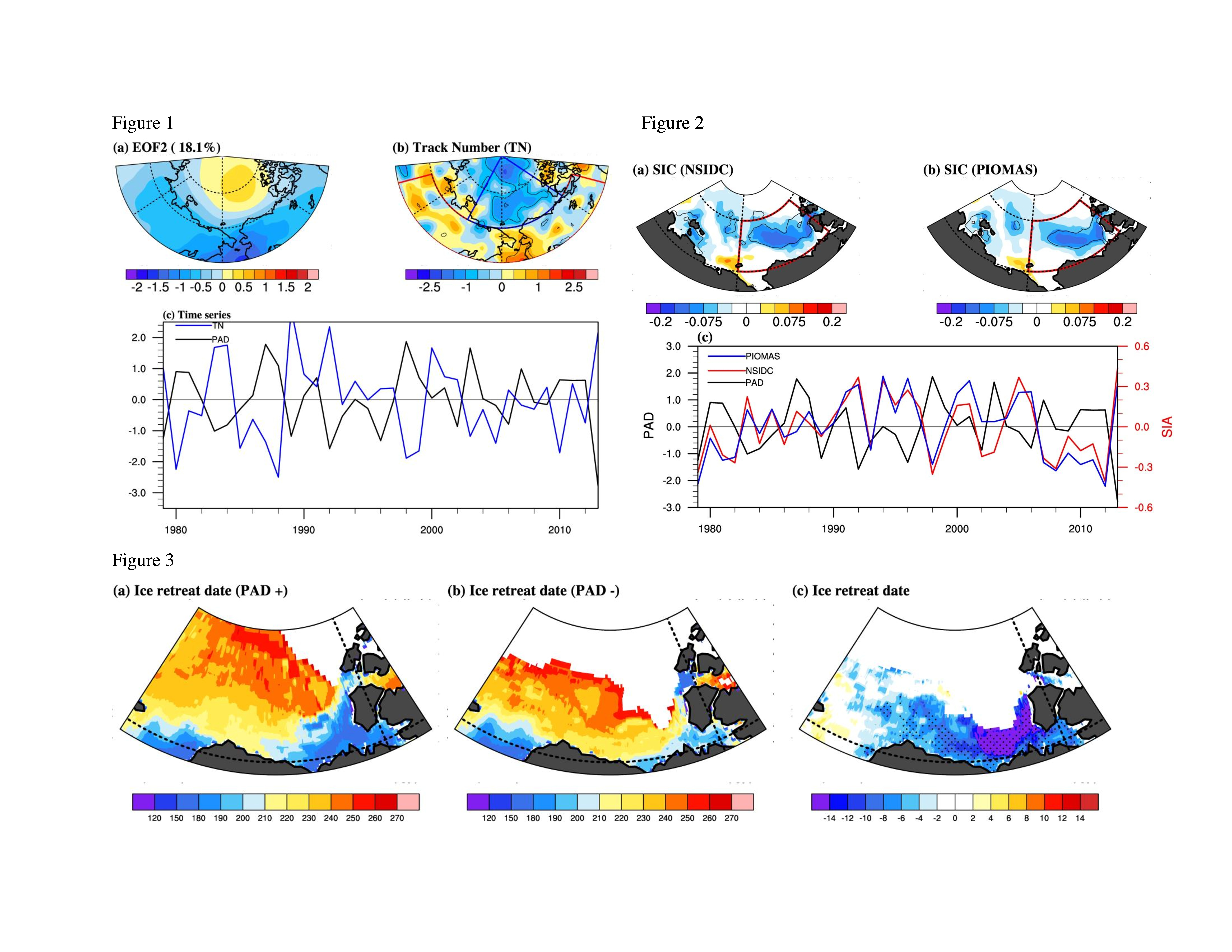