More
Atrium (Hyatt Regency Baltimore)
Minghong Zhang, Bedford Institute of Oceanography, Dartmouth, Canada; and W. Perrie and Z. Long
The Arctic Ocean is experiencing freshening in the latest few decades. Arctic freshwater is important for Arctic stratification and seasonal ice melt, and its distribution in the basin-scale circulation could slow the North Atlantic Ocean overturning circulation by increasing the freshwater fluxes from Fram strait and Davis Strait into the Nordic Seas and the North Atlantic subpolar basin. By comparison, the Beaufort Gyre in the Canada Basin contains the largest proportion of freshwater content (FWC) of the Arctic Ocean’s freshwater, and has undergone freshening in the 1990s to the 2010s. The redistribution of Arctic freshwater is regulated by the atmospheric circulation, ocean circulation and mixing processes.

In our study, we find that the Pacific-Atlantic Arctic (PAA) dipole of the wintertime Arctic circulation can drive a redistribution of Arctic Freshwater, and lead to increasing FWC in the Beaufort Sea, and less FWC in the Makarov and Amundsen Basins. Results are obtained using sea ice observations from the National Snow and Ice Data Center (NSIDC), the European Centre for Medium-Range Weather Forecasts (ECMWF) Re-Analysis dataset, as well as the eddy-permitting global ocean reanalyses GLORYS2V3, which has assimilated in situ profiles of temperature and salinity and along-track sea level anomaly observations.

The Pacific-Atlantic Arctic (PAA) dipole is the third EOF which represents 13.3% of the variance of the wintertime Arctic circulation (Figure 1a). The PAA dipole has a negative anomaly in the Siberia Arctic Ocean and Chukchi–Beaufort Seas and a positive anomaly in the Nordic Seas and northwest Europe. Generally, it forms a dipole between the Pacific side and the Atlantic side of the Arctic Ocean. The associated circulation pattern with this mode exhibits the eastward displaced and deepening Ural trough. Such circulation pattern tends to steer more cyclones originating from the North Atlantic into the Siberian Arctic Ocean, and less that migrate to the Nordic Seas and northwest Europe (Figure 1b). By comparison, on the Pacific side of the Arctic, the deepening trough also acts to increase the cyclones moving into the Chukchi-Beaufort Seas, rather than into the Gulf of Alaska (Figure 1b). Therefore, in the positive dipole mode, due to the anomalous cyclonic circulation on the Russian side of the Arctic, the Beaufort Sea High (BSH) retreats toward eastward and southward directions (Figure 1c). This mode exhibits a decadal variation with a change from the positive phase to negative phase at around 2000 (Figure 1d, black line), and shows significant positive correlation with the FWC in the Beaufort Sea, with a coefficient 0.46.

Figure 1 (a) Regression map of geopotential height at 500hPa (Z500) against the third leading EOFs of wintertime Arctic atmosphere, Pacific-Atlantic Arctic Dipole (PAAD). (b) and (c) same as (a) but for the regressed cyclone track number and sea level pressure and surface winds. Black contour represents the 95% significant level. (d) Time series of the third EOF (black line) and the freshwater content in the Beaufort Sea (red line, 70.50N-80.50N, 1700-2300E). The red (black) dashed lines represent positive and negative phases of PAAD.

Figure 2 Composite Freshwater content for the positive PAAD (a), negative PAAD (b) and their differences (c). (d-f) are the same as (a-c) but for salinity at surface to 50m depth. Black contours in (c) and (f) represent the 90% significant level. 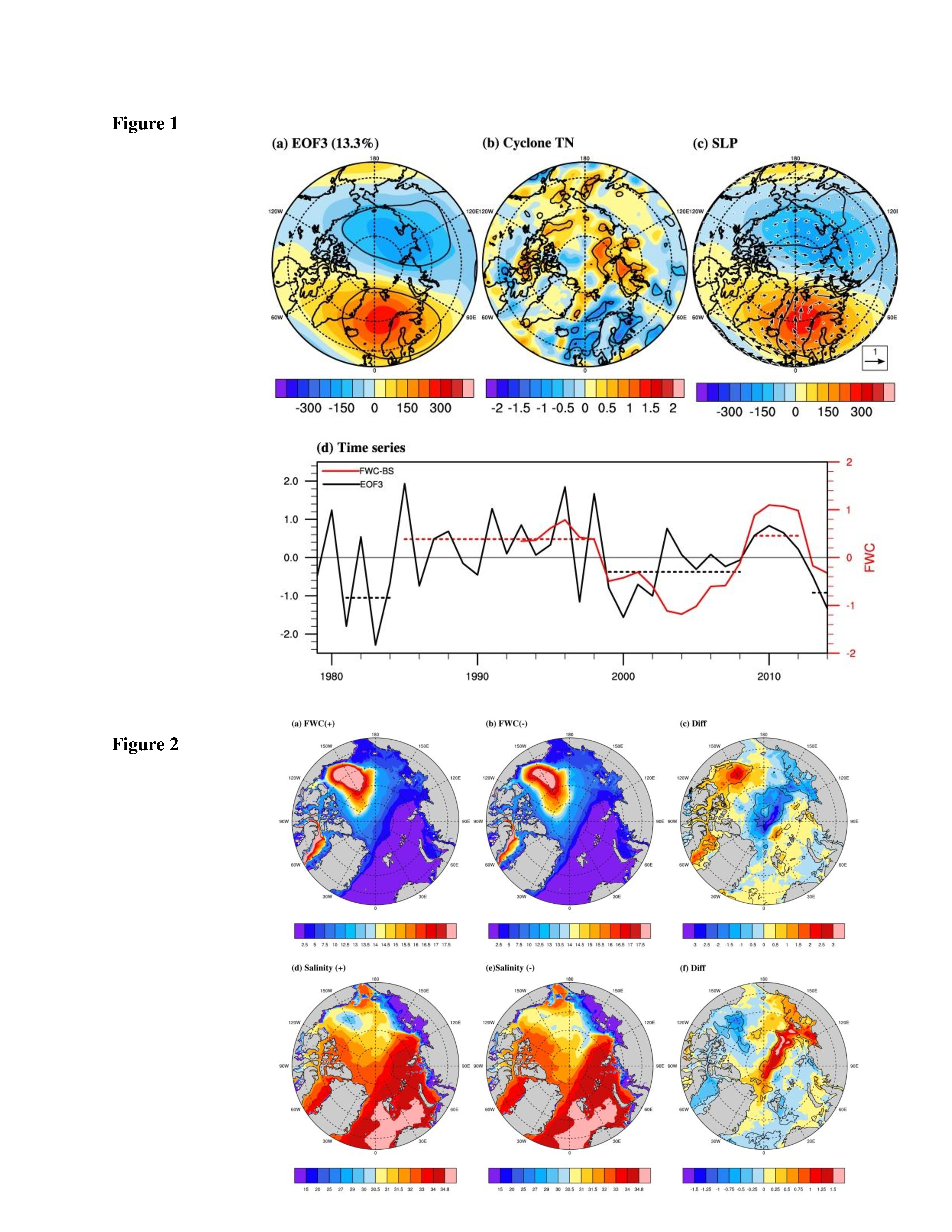