9A.4 Next Generation of Water Use Mapping Based on Merging Landsat and Sentinel-2 Satellite Data

More
North 127ABC (Phoenix Convention Center - West and North Buildings)
Ramesh Singh, ASRC Federal InuTeq, Sioux Falls, SD; and G. B. Senay, M. Schauer, and Z. Wu
The quantification of evapotranspiration (ET) is essential and critical for modeling various aspects in the field of hydrology, climatology, ecology, and agriculture. The availability of gridded ET data has created a paradigm shift in understanding regional agro-hydoclimatology, particularly in heterogeneous areas characterized by various land use and land cover, elevation differences, and variable climatology. The current suite of gridded ET data is based mostly on either Landsat or Moderate Resolution Imaging Spectroradiometer (MODIS) data from USGS/NASA. With availability of higher resolution and more frequent Sentinel-2 data under Copernicus Program from European Space Agency (ESA), there is opportunity to fill in the temporal gaps for better understanding of the spatiotemporal variation of ET. Thus, we explored the potential of synergistic use of Landsat and Sentinel-2 data in Palo Verde Irrigation District, California, USA for quantifying the spatiotemporal variation of ET. Since Sentinal-2 data are lacking a thermal band, we hypothesized that Normalized Difference Vegetation Index (NDVI) data can be useful in sharpening/downscaling and generating gridded ET maps between two Landsat overpasses. Our results showed that in spite of differences in bandwidths of the near infra-red and red bands of Sentinel-2 and Landsat satellites, there was very good agreement (R2 =0.93, RMSE = 0.069) between NDVI computed from these two satellites. In addition, integrating NDVI from Landsat and Sentinel-2 with ET fraction (the ratio of ET to reference ET) from Landsat can be effectively used for downscaling Landsat-based ET maps. We also found that limited availability of archived Sentinel-2 data is a constraint in the historical study of water use mapping and geometric misalignment between Landsat and Sentinel-2 pixels needs further study. Additionally, there is need for further improving our modeling algorithm for generating gridded ET maps between two Landsat overpasses using Sentinel-2 data as a substitute. Nevertheless, downscaled fine-resolution ET maps are of great importance in irrigation water management and land surface processes for better management of the environment and earth’s natural resources. 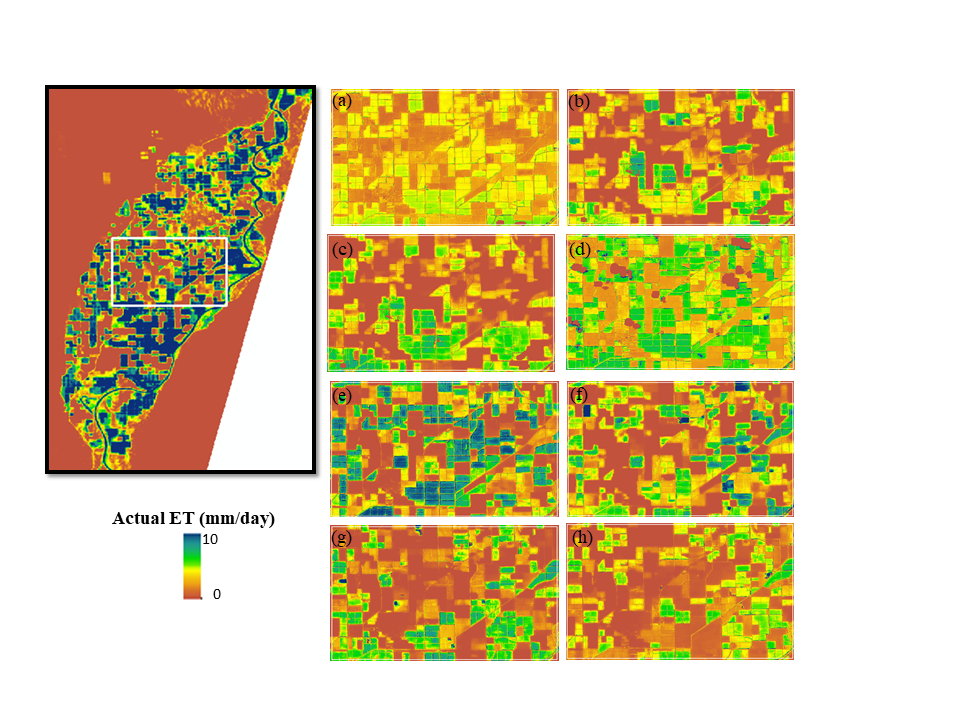