476 The Most Unexpected Surprise in Climate Change: Greenhouse Gases Do Not Absorb Enough Heat to Explain Observed Global Warming. Heat Is Not a Discrete Amount as Widely Assumed. Heat Is Observed to Be a Continuum

Tyndall (1859) observed that greenhouse gases absorb infrared radiation. Ångström (1900), however, showed experimentally “that no more than about 16% of earth’s radiation can be absorbed by atmospheric CO2, and secondly, that the total absorption is very little dependent on the changes in the atmospheric CO2 content.” Scientists today ignore Ångström’s definitive experiments. They simply assume that a gas absorbing infrared energy must get warmer and must somehow slow the cooling of Earth.

The 16% of terrestrial infrared radiation absorbed by CO2 is now known to be merely the resonant frequencies of the bonds holding atoms together. Absorbing energy into molecular bonds has never been shown by experiment to cause significant warming of a gas. Gas temperature is proportional to something quite different, the average translational kinetic energy of all gas molecules. Since November 12, 2015, I have offered “to give ten thousand dollars of my children’s inheritance to the first person or team of people who can demonstrate through direct measurements in the laboratory and/or in the field that a 15% increase in CO2, such as that observed from 1970 to 1998, can actually cause more warming of Earth than caused by observed contemporaneous depletion of the ozone layer of up to 60%” (WhyClimateChanges.com/challenge/). No scientist is likely to be successful because greenhouse-warming theory is based on a fundamental misunderstanding about what heat physically is and how we should calculate changes in heat.

Heat is defined as thermal energy transferred spontaneously from a hotter body of matter to a colder body of matter. Most scientists think of heat simply as an amount of thermal energy where one joule of heat is the amount required to raise the temperature of 1 gram of water by 0.24°C and where the flux of heat, the amount of joules per second passing through some surface, is quantified in units of watts per square meter. Heat is thought to be some generic, undefined form of internal thermal energy. A hotter body is assumed to contain a greater amount of generic heat. All bodies of matter at all temperatures are widely assumed to contain and radiate the same generic heat—the only thing thought to vary is the amount of this generic heat.

But this is not quite right. You can absorb a very large amount of heat radiated by Earth by standing outside all night and you will never get as warm as you do standing for seconds in sunshine. The thermal effect and, therefore, the physical properties of heat are clearly observed to be a function of the temperature of the radiating body. Any amount of solar radiation contains a level of ultraviolet energy sufficient to burn human skin. No amount of radiation from Earth can cause sunburn.

Planck (1900) developed, by trial and error, an equation, now known as Planck’s law, that accurately calculates the amplitude of oscillation at every frequency of oscillation as a function of the temperature of a radiating black body (See figure). Clearly, internal thermal energy is the oscillation of all the bonds holding matter together. The higher the temperature, the higher the amplitude of oscillation at each and every frequency and the higher the frequencies with the greatest amplitudes of oscillation. The confusion is that Planck and most physicists even now think of amplitude of oscillation as an amount of thermal energy in units of watts per square meter and assume heat travels through space as waves or particles. Waves propagate by deforming matter and there is no matter in space. Particles of radiation, photons, are defined by the Planck-Einstein relation to have an energy (E) equal to the Planck constant (h) times frequency (ν). Frequency, however, is a continuum. A continuum times a constant must equal a continuum. Therefore, energy of radiation (E=hν) must be a continuum—radiant energy is not quantized as widely assumed.

Planck’s law shows clearly that temperature of matter results from a broad continuum of frequencies of oscillation of the bonds holding matter together. Heat, similarly, physically consists of a continuum of frequencies of oscillation, the difference between the Planck curve for the higher temperature emitting body minus the Planck curve for the lower temperature absorbing body. For example, the yellow area in the figure shows the heat that Earth must absorb to become as warm as a light bulb. This heat can only come from a body of matter at least as hot as 3300K. Heat is a continuum where the watts per square meter increases with frequency. Thus, watts per square meter is a continuum, not a discrete amount.

The vertical black lines show the frequencies absorbed by CO2 molecules, making up less than 16% of the continuum as noted by Ångström (1900). Sixteen percent of the frequencies required to define heat does not constitute heat. If you have 16% of a person, you do not have a person. Greenhouse gases do not absorb enough heat to explain observed global warming. 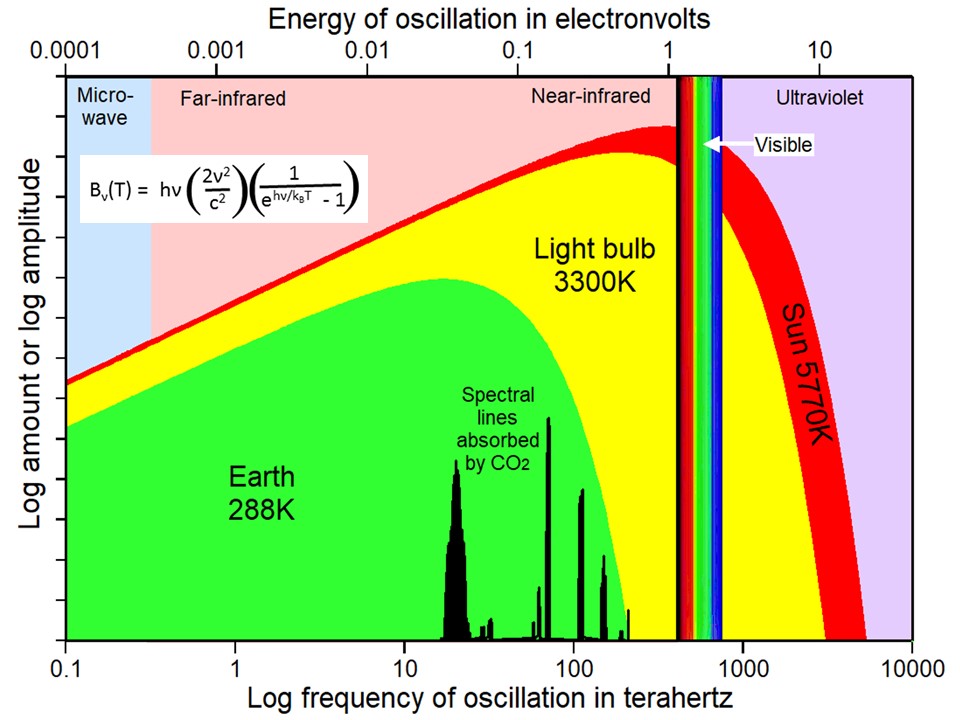