9A.3 North America's Winter Circulation has Changed, but for How Long?

More
North 121BC (Phoenix Convention Center - West and North Buildings)
Shih-Yu (Simon) Wang, Utah State Univ., Logan, UT; and J. H. Yoon and L. Wang
Recorded Presentation
The winter-mean stationary waves over North America are characterized by a pronounced 'ridge–trough' circulation pattern in the upper atmosphere. Referred to as the winter dipole, this circulation pattern establishes the surface temperature division of the climatologically warmer west and colder east of the U.S. Any perturbation of this winter dipole can excite Rossby wave dispersion downwind, so the western ridge and eastern trough are very much anti-correlated. Consequently, an amplification of the stationary wave leads to enhancement of such differences in the atmospheric circulation and surface climate, while the weakened stationary waves reverse it. In early 2017, the cool west versus warm east surface temperature pattern did suggest a "dipole reversal" from the amplified dipole in 2014–2015 winters with a warm, dry western U.S. Meanwhile, other midlatitude countries experienced wild swinging in abnormal and severe winter weather during these two contrasting periods.

Observational evidence suggests that the leading mode of variability in North America's winter circulation has changed around the 1980s. Before 1980, the Pacific-North America (PNA) mode dominates but afterwards, the dipole mode became the leading pattern (see figure). This presentation provides an overview and updates about the consensus and debate concerning the source of dipole variability and its changing pattern, as well as the projected future. Warming in the west Pacific, North Pacific, the ENSO region, and even the Indian Ocean has been linked to the occurrence of drought-enhancing western ridge of the dipole, with differing patterns and temporal characteristics. Coupled models have shown a strengthening of the relationship between the dipole and the West Coast precipitation, with a projected increase in both drought and deluge magnitudes in California. Other factors such as mid-latitude internal atmospheric dynamics could power the dipole variation and contribute to its amplitude. Part of the debate may result from differing definitions of North America's circulation anomaly: While some studies focused on the western ridge alone (which responds to different sources of atmospheric variability), others were concerned with the adjacent wave trains with a greater spatial extent. Furthermore, the Arctic amplification could interact with the mid-latitude circulation and influence the dipole fluctuation and trend. Finally, a large body of research has shown evidence of remote teleconnections of tropical origin leading to stagnation of the midlatitude stationary waves. The effect of an anthropogenic climate warming on amplifying these tropical teleconnections and associated dipole variations warrants further investigation. 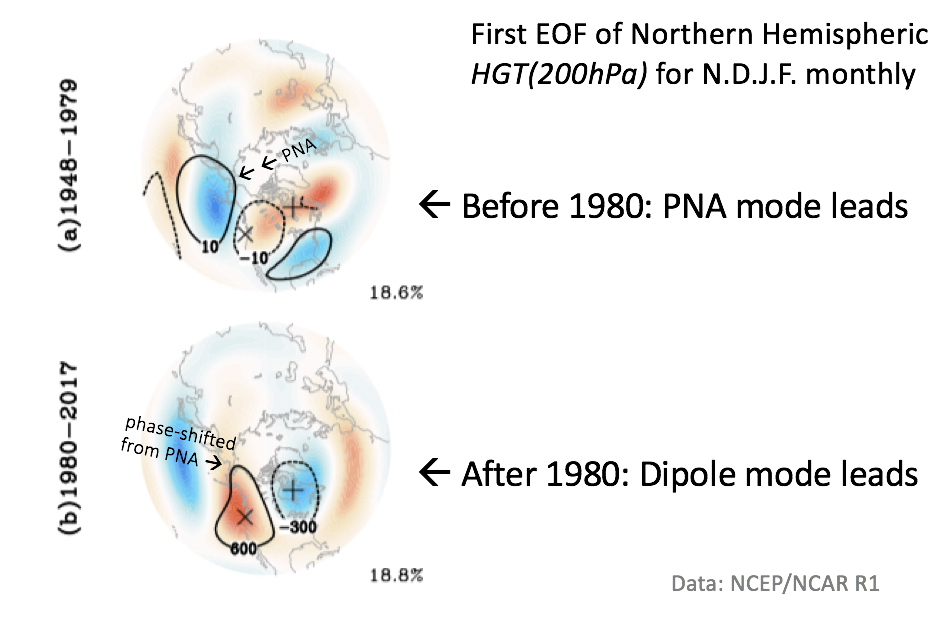