More
Pavilion Ballroom (Hilton Portland )
James B. Elsner, Florida State University, Tallahassee, FL; and T. H. Jagger and T. Fricker
Recorded Presentation
The talk demonstrates how to makes estimates of local tornado risk from records of past events using statistical models. First, a spatial model is fit to the tornado data aggregated by counties with terms that control for changes in observational practices over time. Results provide a long-term view of risk that delineates the main tornado corridors of the central Plains and Southeast where the expected annual rate exceeds two tornadoes per 10,000 square km. A few counties in the Texas Panhandle and central Kansas have annual rates that exceed four tornadoes per 10,000 square km. Refitting the model after removing the least damaging tornadoes from the data (EF0) produces a similar map but with the greatest tornado risk shifted southward and eastward. Second, a space-time model is fit to the data aggregated in raster cells with terms that control for changes in climate factors. Results provide a short-term view of risk. The short-term view identifies the shift of tornado activity away from the Ohio Valley under El Nino conditions and away from the Southeast under positive North Atlantic oscillation conditions. The combined effect of the predictors is quantified by fitting the model after leaving out the year to be predicted. The models provide state-of-the-art views of tornado risk that can be used by government agencies, the insurance industry, and the general public. 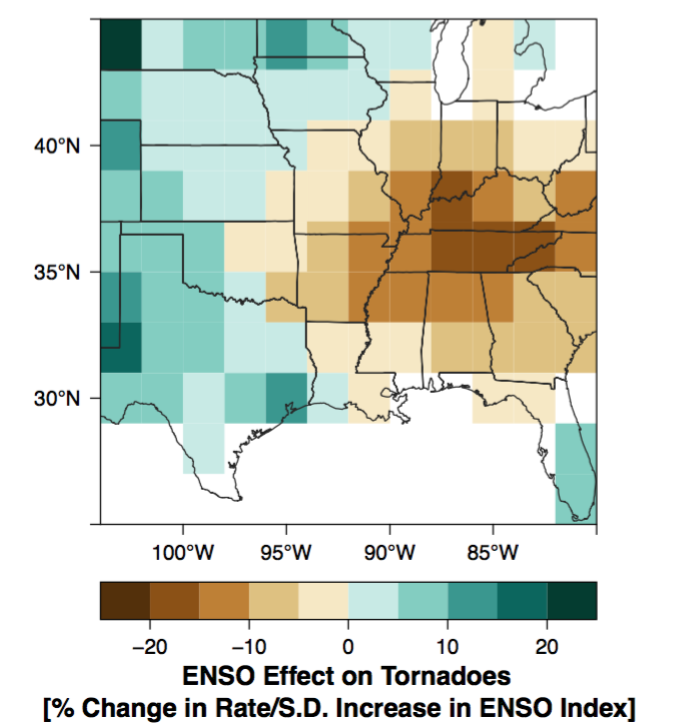