More
Stowe & Atrium rooms (Stoweflake Mountain Resort )
Kenta Sueki, RIKEN Center for Computational Science, Kobe, Japan
In Japan, 20% of tornadoes are spawned by typhoons (Niino et al., 1997). Sueki and Niino (2016) investigated structures of typhoons which spawned tornadoes in Japan during 1991 and 2013 by a composite analysis of reanalysis dataset and found that tornadic typhoons tend to have large storm-relative environmental helicity (SREH) and convective available potential energy including the effects of entrainment (Entraining CAPE: E-CAPE) due to their asymmetric structure associated with the extratropical transition. However, Sueki and Niino (2016) do not clarify the mechanism of the increase of SREH and E-CAPE associated with the extratropical transition of typhoons and its direct impact on tornadogenesis. In this study, numerical simulation of Typhoon 201318 (MAN-YI) which spawned at least 11 tornadoes in Japan from 15 to 16 September 2013 is performed to investigate the relationship between the structural change of the typhoon and the tornado occurrences.
In the present study, SCALE-RM (Nishizawa et al., 2015; Sato et al., 2015) which is a regional weather and climate model developed at RIKEN is used. The model domain is 3360 km x 3840 km area centered on latitude 32°N and longitude 139°E. Horizontal grid spacing is 20 km and the number of vertical layers is 40 (the model top height is 30 km). NCEP-FNL is used for initial and boundary conditions. The initial time is set at 1200UTC 12 September 2013. Sea surface temperature is fixed at its initial value. The one-moment bulk cloud microphysics scheme (Tomita, 2008), the planetary boundary layer scheme of MYNN lev. 2.5 (Mellor and Yamada, 1982; Nakanishi and Niino, 2004), and the radiation scheme of mstrnX (Sekiguchi and Nakajima, 2008) are used, whereas cumulus parameterization is not used.
In the experiment, the movement of Typhoon 201318 was successfully simulated from the developing stage to the extratropical transition stage. The area where time average value of entraining energy helicity index (E-EHI, which is defined as E-EHI = SREH × E-CAPE / 160,000) during 1200UTC 14 to 1200UTC 16 becomes large is consistent with the distribution of observed tornado occurrences (Fig. 1), which implies that the environment suitable for tornadogenesis was formed in association with the typhoon's approach. In the presentation, we will show the relationship between the increase of E-EHI and development of convective storms having high updraft helicity (Kain et al., 2008) based on the results of further high-resolution downscaling experiments. 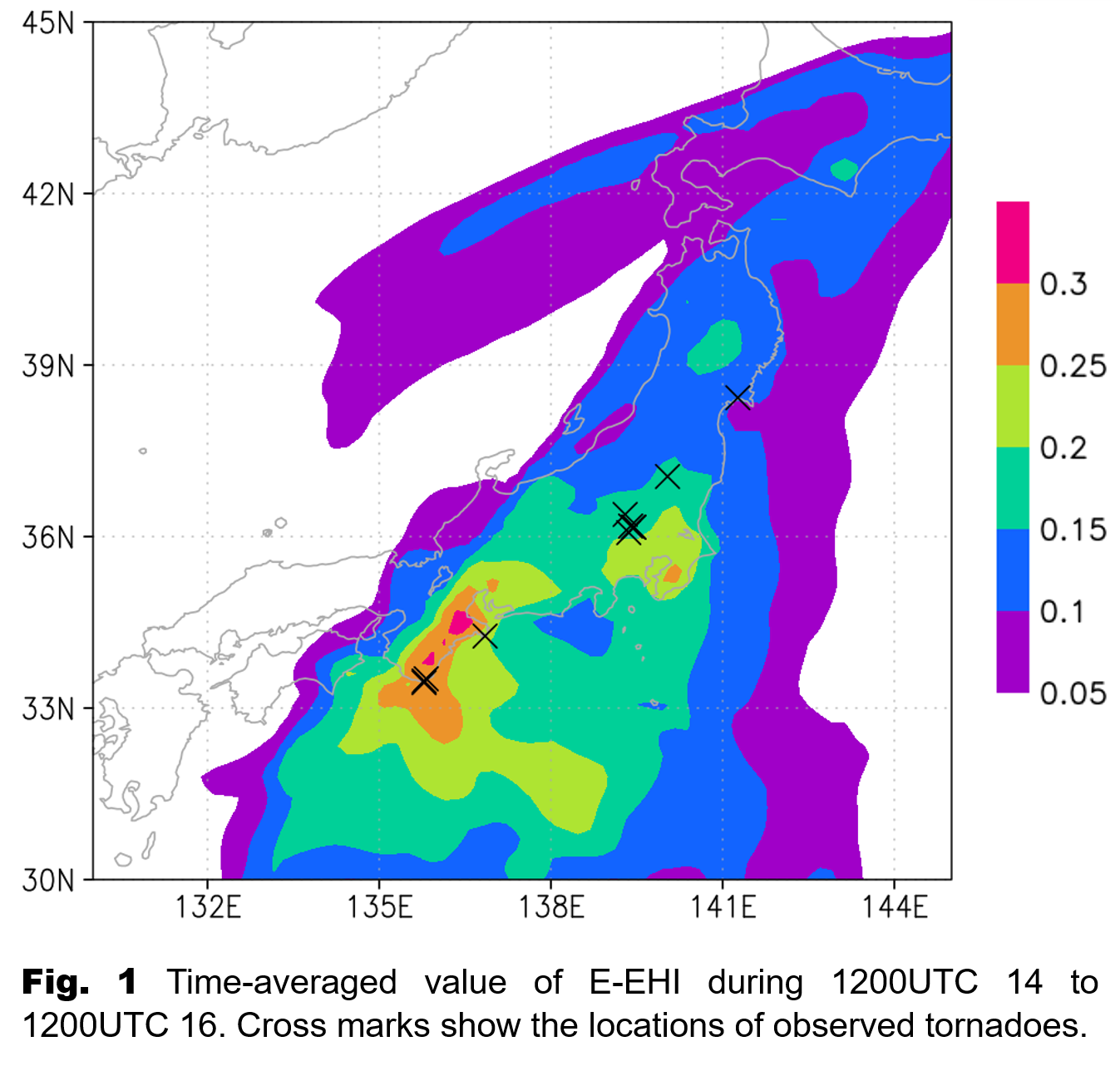