More
Pinnacle room (Stoweflake Mountain Resort )
Louis J. Wicker, NSSL, Norman, OK; and A. J. Clark, B. E. Coffer, and M. D. Parker
Recorded Presentation
Recent studies based on data from the VORTEX-2 experiment (Coffer and Parker 2017; Coffer et al. 2017, hereafter both papers will be referred to as C17) indicate that composite soundings created from the tornadic and non-tornadic supercell cases contain the information that differentiates between the two types of supercells. Coffer and Parker (2017), using high-resolution idealized cloud model experiments (Δ ~ 125 m), demonstrate that the two soundings generate very different near-surface gust front and updraft structures. Only the sounding from the tornadic composite produces a significant and long-lived tornado-like vortex. Coffer et al. (2017) expands on this work by creating an ensemble of thirty soundings from both tornadic and non-tornadic composites by introducing small wind perturbations into each profile. The results again show that the tornadic ensemble produced on average much stronger low-level vortices, and that the strongest vortices in the non-tornadic ensemble were still weaker than the vortices from the tornadic ensemble.

The numerical experiments from C17 are run at near-LES resolution (Δ~ 125 m) both for the horizontal and the vertical grid spacing. Operational convection allowing models such as EMC’s HREF or experimental convection-predicting systems (e.g., GSD’s HRRR ensemble / NSSL’s experimental Warn on Forecast system, NEWS-e) currently run at horizontal resolutions which are 20x coarser (Δx ~ 3 km) and 2-3x coarser for the vertical grid spacing (50 versus 150 vertical levels). Clearly operational forecast systems for convection will not be able to run at near-LES scales anytime during the next 5-10 years, and even then perhaps only in a deterministic manner via a dual-resolution hybrid system via 4DEnVar.

Results from C17 suggest that the composite soundings could be used, in an idealized manner, to determine at what horizontal and vertical resolutions do the low-level updraft and gust front structures become indistinguishable. Recent work by Potvin and Flora (2015) suggest that a minimal horizontal resolution for prediction of mesocyclone evolution may be around Δx ~ 1 km. Initial simulations (see Figs. 1 & 2 below) show the significant impact of horizontal resolution on the intensity and shape of low-level updraft structures in both tornadic and non-tornadic storms. Additionally, few studies have also considered the sensitivity of the storm features to the vertical grid resolution in the lowest 1-2 km.

Similar to Coffer and Parker (2017) approach, this work will examine at what horizontal and vertical resolutions do low-level storm structures generated from each of the composite soundings become indistinguishable in terms of updraft configuration, vortex intensity, and vertical alignment. We expect this resolution to be somewhere between 0.5 - 2km, but expect additional sensitivity to the vertical resolution. Results from this work could help guide the development and configuration of next generation convective-allowing model and data assimilation systems for severe weather prediction. 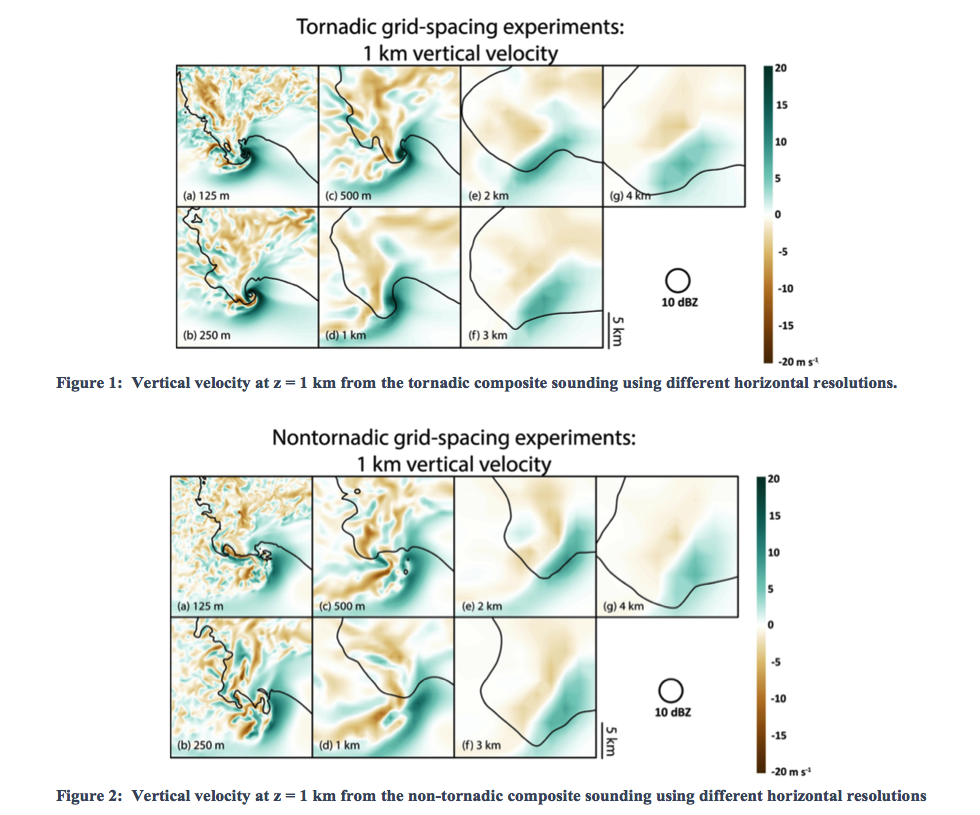