Previously dominant thinking held that the Tibetan Plateau (TP) serves as an elevated heat source that warms air above the plateau and drives the large-scale boreal summer South Asian monsoon (SAM). Recent studies suggested that the Himalayas alone could produce a strong monsoon by insulating warm and moist air south of the Himalayas against dry extratropical air. Almost all of these studies, however, used climate models with fairly coarse resolution that barely resolved the narrow Himalayan mountain range. Exploiting the high-resolution Weather Research and Forecasting model, nine sets of experiments with altered orography or reduced surface sensible heating (SH) were integrated globally with a resolution of 40 km to explore thermal controls on the SAM.

We use the modified Webster and Yang Index (mWYI) to quantify the strength of the monsoon. The mWYI is the zonal wind shear between 200 and 850hPa, averaged from 5°N to 25°N, 50°E to 100°E, and represents the dominant mode of interannual variations of the SAM. In experiments with altered orography (Fig. 1A) as well as in experiments with reduced SH (Fig. 1B), the mWYI is highly correlated with the thermal contrast, indicated by Θec, which is defined as the difference between the maximum boundary layer equivalent potential temperature (θeb) south of the Himalayas and the saturated equivalent potential temperature in the free troposphere over the Equatorial Indian Ocean. The results are interpreted under the framework of convective quasi-equilibrium: the strength of the monsoon is associated with the strength of the θeb maximum south of the Himalayas, which can be influenced by the modification of orography and SH perturbations. Our results confirm that the large-scale monsoon circulation is largely unchanged when most of the plateau is removed while the narrow range of the Himalayas preserved. In the Tibetan Plateau's absence, the monsoon strength falls with the height of the Himalayas because of the reduced insulation effect. Also, there is a clear dependence of monsoon strength on the SH perturbation whether or not the SH anomaly is elevated. The mWYI is most sensitive to the SH perturbation over the regions with the highest θeb in North India, and least sensitive to the SH anomaly over the TP. Figure 1 also shows that when the mWYI is regressed against Θec, the regression coefficient is larger for experiments with altered orography than for those with altered SH, and it is suggested that changes in free tropospheric humidity cause the difference. Reduced orography produces a drier troposphere over the regions with the highest θeb so that convection requires a more unstable stratification. For the same θeb decrease, upper tropospheric temperatures decrease more in the experiments with altered orography than in those with reduced SH, and therefore the mWYI falls more with altered orography. 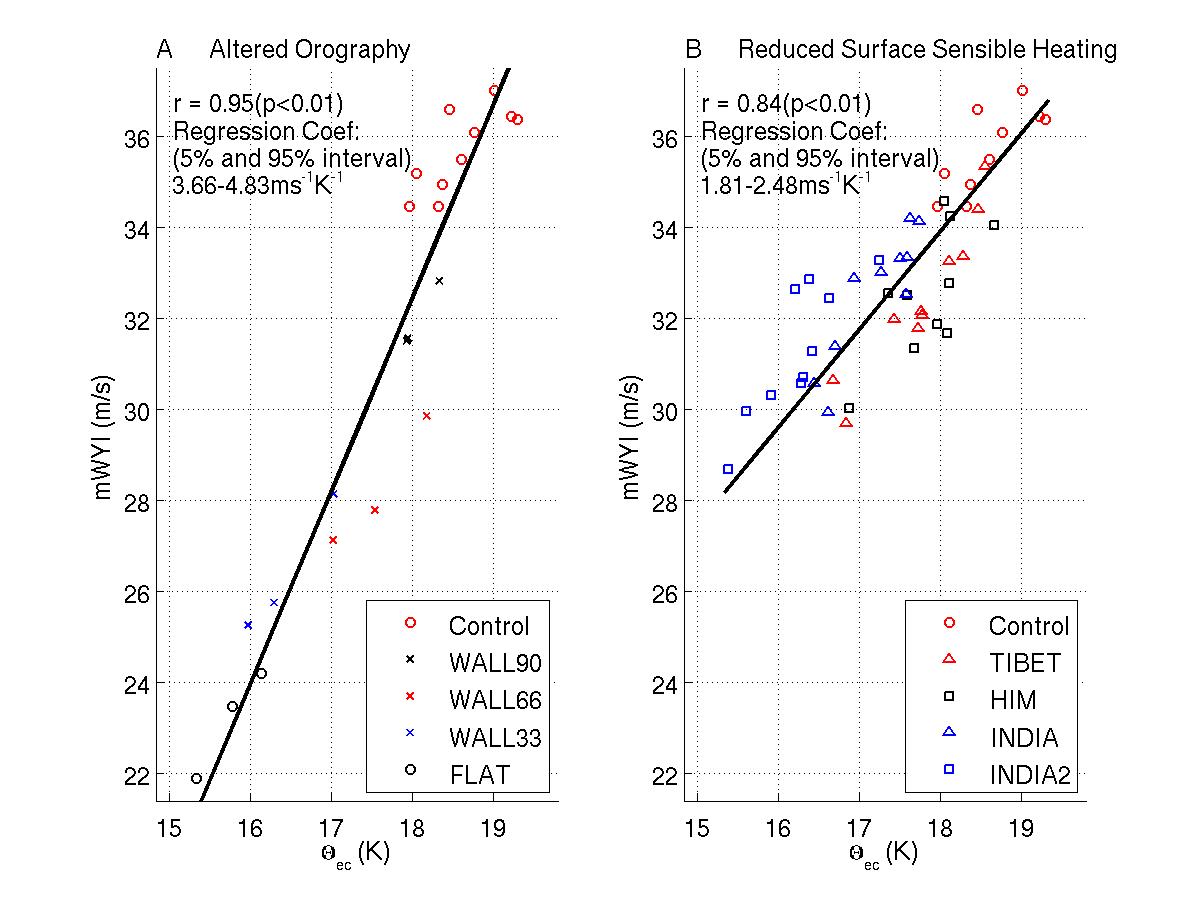 Figure 1, the strength of the SAM regressed against the thermal contrast from the experiments with (A) altered orography and (B) reduced SH. In WALL90, WALL66 and WALL33, the TP is removed, but the Himalayas are truncated at 90%, 66% and 33% of their full height, respectively. In FLAT, the elevation is set to zero north of 20°N and between 60°E and 120°E. In the TIBET experiment, the SH is reduced by 344TW over the TP. A reduction of 114TW in the SH is implemented over the south slope of the Himalayas in HIM, and over North India in INDIA.  Also, in INDIA2, 114TW of SH is removed in the region with the highest θeb from the CONTROL.