8A.2 Upscale Impact of Mesoscale Disturbances of Tropical Convection on Synoptic-Scale Equatorial Waves

More
Masters E (Sawgrass Marriott)
Qiu Yang, New York Univ., Abu Dhabi, UAE; and A. Majda
Audio File
Recorded Presentation
Tropical rainfall is largely controlled by convectively coupled equatorial waves, whose dynamical and convective morphology exhibits self-similarity across multiple spatial and temporal scales. For example, convectively coupled Kelvin waves (CCKWs) is typically organized by an eastward-moving synoptic-scale convective envelope with numerous embedded westward-moving mesoscale disturbances. In the conceptual figure (attached below), the left diagram shows an eastward-moving CCKW (blue) on the synoptic scale, where the rectangular cuboid denotes a mesoscale domain. The right diagram (zoom in the rectangular cuboid in the left diagram) shows a mesoscale convective system propagating at a tilt angle in the mesoscale domain. Due to limited computing resources, it is a huge challenge for present-day global climate models (GCMs) in coarse resolutions to explicitly resolve those mesoscale disturbances inside the large-scale organization of convection. One hypothesis to explain the significant discrepancies of precipitation in GCMs is the inadequate treatment of mesoscale disturbances and their upscale impact on the large-scale organization of convection. Here we are presenting our two recent papers on upscale impact of mesoscale disturbances of tropical convection on CCKWs, based on a simple multi-scale asymptotic model.

The simple multi-scale asymptotic model, originally derived by Majda (2007), is used to capture this multi-scale structure, where mesoscale fluctuations are directly driven by mesoscale heating and synoptic-scale circulation is forced by mean heating and eddy transfer of momentum and temperature. The eddy transfer of momentum and temperature is interpreted as the upscale impact from mesoscale fluctuations to synoptic-scale circulation. In the first JAS paper by Yang and Majda (2017a), the two-dimensional version of the multi-scale model drives the synoptic-scale circulation, successfully reproduces key features of flow fields with a front-to-rear tilt and compares well with results from a cloud-resolving model. In the second JAS paper by Yang and Majda (2017b), the three-dimensional version of the multi-scale model is studied. Results show that upscale impact of mesoscale disturbances that propagate at tilt angles (1100 ~ 2500) induces negative lower-tropospheric potential temperature anomalies in the leading edge, providing favorable conditions for shallow convection in a moist environment, while the remaining tilt angle cases have opposite effects. Even in the presence of upright mean heating, the front-to-rear tilted synoptic-scale circulation can still be induced by eddy terms at tilt angles (1200 ~ 2400). In the case with fast propagating mesoscale heating, positive potential temperature anomalies are induced in the lower troposphere, suppressing convection in a moist environment. This simple model also reproduces convective momentum transport and CCKWs in agreement with results from a recent cloud-resolving simulation.

This study based on a simple multi-scale model also has several implications for physical interpretation and comprehensive numerical models. First, the explicit expressions for eddy flux divergences of momentum and temperature provide a way of assessment of upscale impact of mesoscale disturbances of tropical convection on tropical waves, which should be useful to improve convective parameterization of organized tropical convection in GCMs, especially the so-called convective momentum transport that are widely recognized and studied in the literature. Secondly, it can be used to model many other phenomenon such as westward-propagating 2-day waves within Madden-Julian Oscillation and easterly waves in the ITCZ, providing a simple multi-scale framework for theoretically explaining scale interactions of organized tropical convection and practically diagnosing them through momentum and heat budgets. 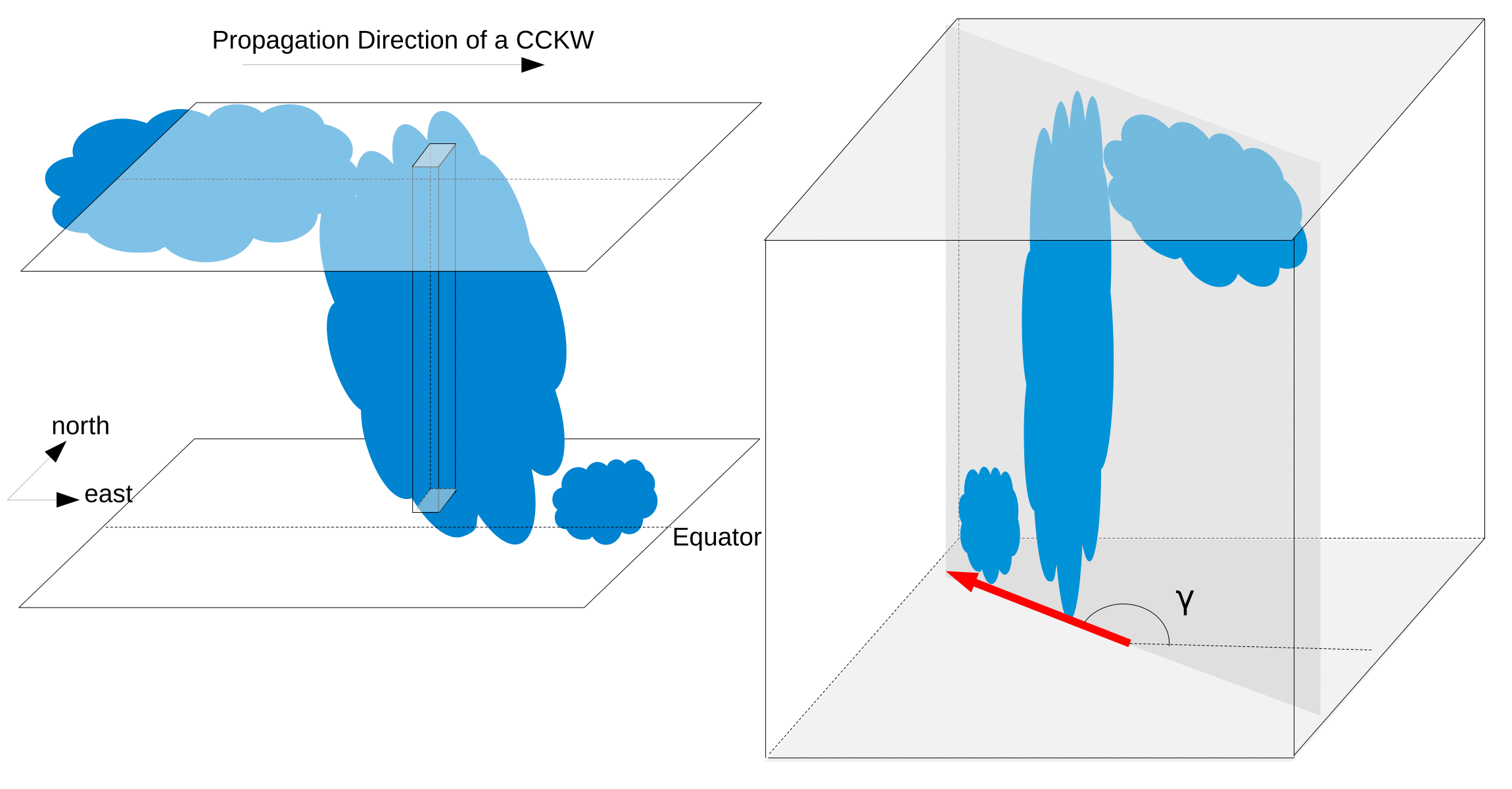