8A.3 Synoptic-Scale Waves in Sheared Background Flow over the Western North Pacific

First, using three datasets of Climate Forecast System Reanalysis, Joint Typhoon Warning Center best track, and Tropical Rainfall Measuring Mission Multi-satellite Precipitation Analysis, this study selects two long-lasting, westward-propagating synoptic-scale wave trains over the tropical western North Pacific in 2004 and 2006 to comparatively investigate the large-scale factors controlling the structure and evolution of tropical synoptic-scale disturbances. The major distinctions between the two wave trains are found in their vertical structures. The maximum perturbations in 2004 occurred from the lower to middle troposphere with an equivalent barotropic structure, while those in 2006 primarily grew in the upper troposphere with a significant tilting structure. Such distinctions are found to be determined by the combined effects of three large-scale factors: the vertical shear of the background zonal wind, the lower-tropospheric monsoon trough, and the tropical upper-tropospheric trough (TUTT). In 2004, there exists a significant easterly sheared environment and a stronger monsoon trough, which both favor the growth of the perturbations in the lower troposphere. In contrast, in 2006, there is a significant westerly sheared environment that is enhanced by the westward shift of the TUTT, favoring the growth of the perturbations in the upper troposphere. Meanwhile, the stronger TUTT in 2006 tends to cause a faster growth of the upper-level perturbations by offering eddy kinetic energy from the convergence of the meridional ambient flow.

Then, this study investigates the characteristics and energetics of convectively coupled TD-type waves under the effects of different circulation patterns in association with vertical wind shear. Results exhibit that different ambient sheared flows significantly affect the vertical structure of westward-propagating TD-type waves, with a lower-tropospheric mode in an easterly sheared background and an upper-tropospheric mode in a westerly sheared background. Energetic diagnoses demonstrate that when the disturbance is trapped in the lower (upper) level by easterly (westerly) shear, the horizontal mean flow in the lower (upper) level favors wave growth by converting energy from the shear of the zonal mean flow (from the convergence of the meridional mean flow). During the penetration of a westward-propagating synoptic-scale disturbance from a westerly sheared flow into an easterly sheared flow, the upper-level disturbance decays, and the lower-level disturbance intensifies. Meanwhile, the upper-level kinetic energy is transferred downward, but the effect induces the wave growth only confined to the mid-levels. Consequently, the low-level growth of the westward-propagating upper-level synoptic-scale disturbance is mainly attributed to the barotropic conversion of horizontal mean flow in the lower troposphere.

The westward propagation of the TD-type waves over the western North Pacific can be summarized as follows: When a synoptic-scale disturbance appears near the central Pacific, the westerly shear traps the disturbance in the upper troposphere and the TUTT feeds mean kinetic energy to the eddies, which favors upper-level growth. With westward propagation and penetration of the easterly sheared flow, the upper-level kinetic energy travels downward to the intermediate troposphere, which affects the mid-level wave growth. Meanwhile, the vertical structure of the lower-tropospheric disturbance is modified by easterly shear, and favorable zonal wind shear of the lower-tropospheric monsoon trough destabilizes the low-level disturbance by feeding mean kinetic energy to eddies. Thus, the low-level TD-type disturbances strengthen through the barotropic energy conversion and the positive feedback between low-level circulation and deep convection. 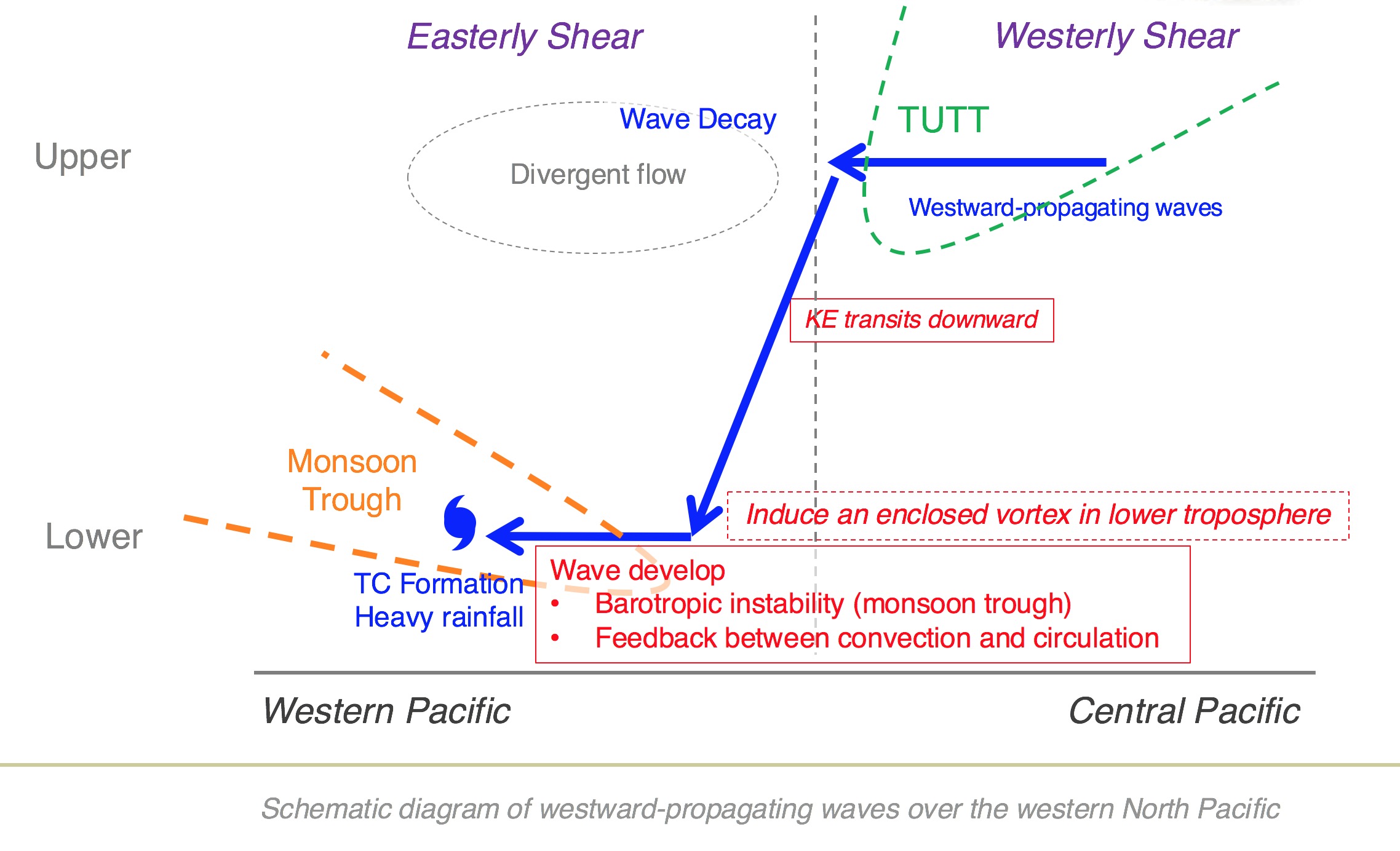