More
Champions ABC (Sawgrass Marriott)
Stefano Alessandrini, NCAR, Boulder, CO; and C. M. Rozoff, W. E. Lewis, and L. Delle Monache
Audio File
Recorded Presentation
AnEn track prediction is carried out in a Lagrangian, storm-following framework. Actual forecast position is not the most optimal observable with which to construct the AnEn for TC track. Rather, relative storm position displacements are the way we construct analogs. We test two different methods. One method involves predicting incremental track displacements per lead-time. The observed displacement at time t, Δxobs (t), is defined as the vector difference between the storm position xobs at time t+1 and t. For each forecast lead time and TC, we will search for a subset of historical HWRF forecasts sharing defined similarities to the current HWRF forecast. The corresponding observed displacements are used as ensemble members in the TC track AnEn.

To create a complete forecasted TC track ensemble, we concatenate via the Schaake Shuffle (SS) technique the time series of displacements across all forecast lead times, starting from the estimated TC location at t = 0 (see Fig. 1). With the SS technique, the ensemble members for a given forecast lead-time are ranked and matched with the rank of past observations appropriately selected across the historical record. The ensembles are then reordered to match the original order of the selected historical data. A second approach involves predicting the HWRF track displacement error to produce a track correction to the HWRF track forecast. Here, again, the SS technique is used to concatenate track displacements to obtain a full track. In both approaches, predictors include the track displacements themselves along with aspects of the storm’s large-scale environment (for example, a two-dimensional empirical orthogonal function of the large-scale geopotential height fields). In each track prediction approach, the AnEn yields an ensemble prediction of the storm track using a single deterministic HWRF forecast. In this presentation, we will also present the performance of these track models in terms of mean absolute error and spread-skill relationships and also provide a real-time validation for the 2017 Atlantic and Eastern Pacific hurricane seasons.

Figure 1 Top: An example of non-coupled ensemble displacement forecasts Δxi(t) (Δxi =Δxobs(t), see text), selected from past observations with the AnEn techniques at three consecutive forecast lead times (t0, t1 and t2), where i = 1, ..., n, with n being the number of ensemble members, set equal to 3 for sake of simple illustration. Bottom: concatenation with the Schaake Shuffle (SS) of the displacements to build a storm track ensemble forecast. 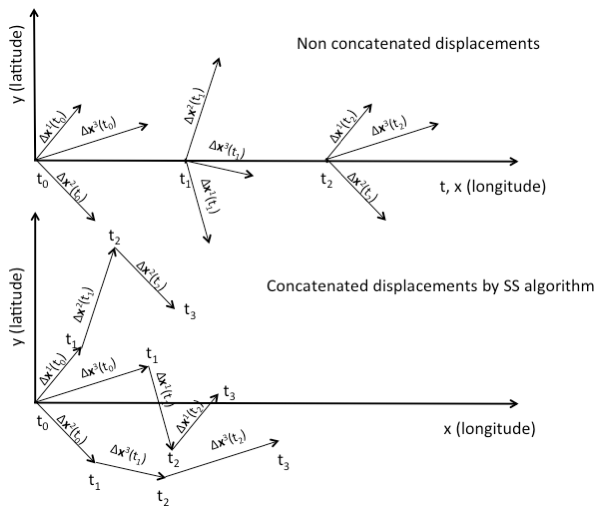