J1.2 Identifying the drivers of drought onset and cessation

Worldwide, severe droughts have extensive environmental impacts, such as declined crop yield and livestock production, inadequate water supply and elevated risk of bushfires. Additionally, dealing with drought breaking floods adds significant strain to society and the economy, particularly when businesses and communities are not prepared. Increasing vulnerability to droughts with reduced per capita water storage, particularly in semiarid regions, underscores the need for predictive understanding of drought. However, at present, useful forecasts of persistent drought or drought breaking conditions are not yet fully achievable due to our incomplete understanding of the controls on drought extent and duration. Therefore, to better coordinate drought planning and drought relief activities, it is imperative to understand the factors affecting drought initialization and cessation.

In this study we analyze the spatial and temporal characteristics of historical droughts in two spatially diverse but climatologically similar regions, southcentral US (Texas) and southeast Australia (Murray Darling Basin, MDB). Based on an updated Kšppen-Geiger worldwide climate classification (Peel et al., 2007), the main climate types over Texas and MDB contain Arid-Steppe-Hot (BSh), Arid-Steppe-Cold (BSk), Temperate-Without dry season-Hot summer (Cla), and Temperate-Without dry season-Warm summer (Clb). The average annual precipitation varies from east (higher) to west (lower) in both regions, with large inter-annual variability. Both regions are no strangers to severe and prolonged drought. For example, one of the most catastrophic droughts in the USA in the 20th Century affected every part of the state of Texas in the first two thirds of the 1950s. Similarly, between 1937-1945 Southeast Australia was subjected to severe multi-year drought, known as the World War II Drought. Recently both regions have yet again experienced severe drought - the 'Big Dry' affected eastern Australia during the mid-1990s through to early 2010 and resulted in a marked reduction in rainfall and runoff (Verdon-Kidd and Kiem, 2009), while Texas entered a drought in 2010, which in some parts of the State is still ongoing.

In this study we use the Standardized Precipitation Index, (SPI; McKee, 1993) to represent meteorological drought, the Normalized Difference Vegetation Index (NDVI) to indicate agricultural drought and the Streamflow Drought Index (Nalbantis and Tsakiris, 2008) to capture hydrological drought. We find that historical drought events over Texas and MDB have been somewhat out-of-phase, i.e. dry/wet spells in Texas and wet/dry spells in MDB tended to be present simultaneously (see Figure 1). Further, it is shown that, for both regions meteorological and agricultural droughts tend to develop gradually over Texas and the MDB, while hydrological drought develops much more rapidly following the onset of meteorological drought. We also find that droughts end twice as quickly as they develop over Texas (99% significance level). However, the rate of drought onset and decay over the MDB are not significantly different.

An analysis of the large-scale climate modes up to 6 months prior to the onset of major droughts revealed that climate drivers of Pacific origin (i.e. El Nino/Southern Oscillation and Interdecadal Pacific Oscillation) play a significant role in initiation of the majority of historical droughts since 1900 for both Texas and the MDB. Furthermore, for MDB droughts, anomalously cool SSTs off the Northwest of Australia precede all but one of the historical droughts identified. While large-scale drivers are likely to responsible for drought initiation (since it tends to be a gradual process), synoptic scale influences (such as Hurricanes) are more likely to be responsible for drought breaking events, particularly in Texas where droughts to end abruptly.

The multi-faceted nature of droughts and the complexities associated with securing water resources in the face of a highly uncertain future requires innovative thinking to improve our understanding and reduce our vulnerability. In the light of the experiences during the two recent droughts in Texas and the MDB and the significant uncertainties associated with future climate, changes have been made to the water management to better manage supplies in the face of a variable and changing climate. The effectiveness of these planning processes would nevertheless be improved by better understanding the drivers of drought initiation and cessation. This study therefore provides an initial step towards developing a predictive understanding with respect to the rate of drought onset and termination and the linkage to remote climate drivers. 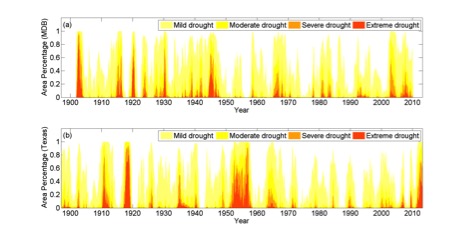 Figure 1: Area percentages of different drought severities defined using SPI24 since 1897 over MDB (a) and Texas (b), respectively