12A.1 La Niña-like Mean-State Warming Caused By the Nonlinear ENSO Warming Suppression (NEWS) and Its Implications for Multidecadal SST Variability and Change

More
605 (Washington State Convention Center )
Tsubasa Kohyama, Univ. of Washington, Seattle, WA; and D. L. Hartmann
Recorded Presentation
The majority of global climate models, under global warming, warm faster in the eastern equatorial Pacific than in the west and produce a weakening of the Walker circulation. Recently, however, Kohyama, Hartmann, and Battisti (2016) showed that GFDL-ESM2M is an exception that exhibits a La Niña-like mean-state warming with a strengthening of the Walker circulation. This study further investigates the cause of this exceptional response and proposes a new mechanism, the Nonlinear ENSO Warming Suppression (NEWS), where the transient heating rate difference between the atmospheric and oceanic reservoirs annihilates extreme El Niños, causing a suppression of the mean-state warming in the east. Heat budget analyses of GFDL-ESM2M robustly show that nonlinear dynamical heating, which is necessary for extremely warm El Niños, becomes negligible under warming. An idealized nonlinear recharge oscillator model suggests that, if the temperature difference between the atmospheric and oceanic reservoirs becomes larger than some threshold value, the upwelling becomes too efficient for the El Niño Southern Oscillation (ENSO) to keep its nonlinearity. Therefore, extreme El Niños dissipate but La Niñas remain almost unchanged, causing a La Niña-like mean-state warming. NEWS is consistent with observations and GFDL-ESM2M but not with the majority of state-of-the-art models, which lack realistic ENSO nonlinearity. NEWS and its opposite response to atmospheric cooling, Nonlinear ENSO Warming Acceleration (NEWA), might contribute to the Pacific multi-decadal natural variability and global warming hiatuses. The NEWS-NEWA cycle is also consistent with the idealized model and GFDL-ESM2M. If this cycle is realistic, global warming hiatuses might better be treated as two-way ocean-atmosphere interaction between the global-mean atmospheric reservoir and the Pacific cold tongue, rather than a unidirectionally forced response of the atmospheric reservoir to the "prescribed" SST variations. 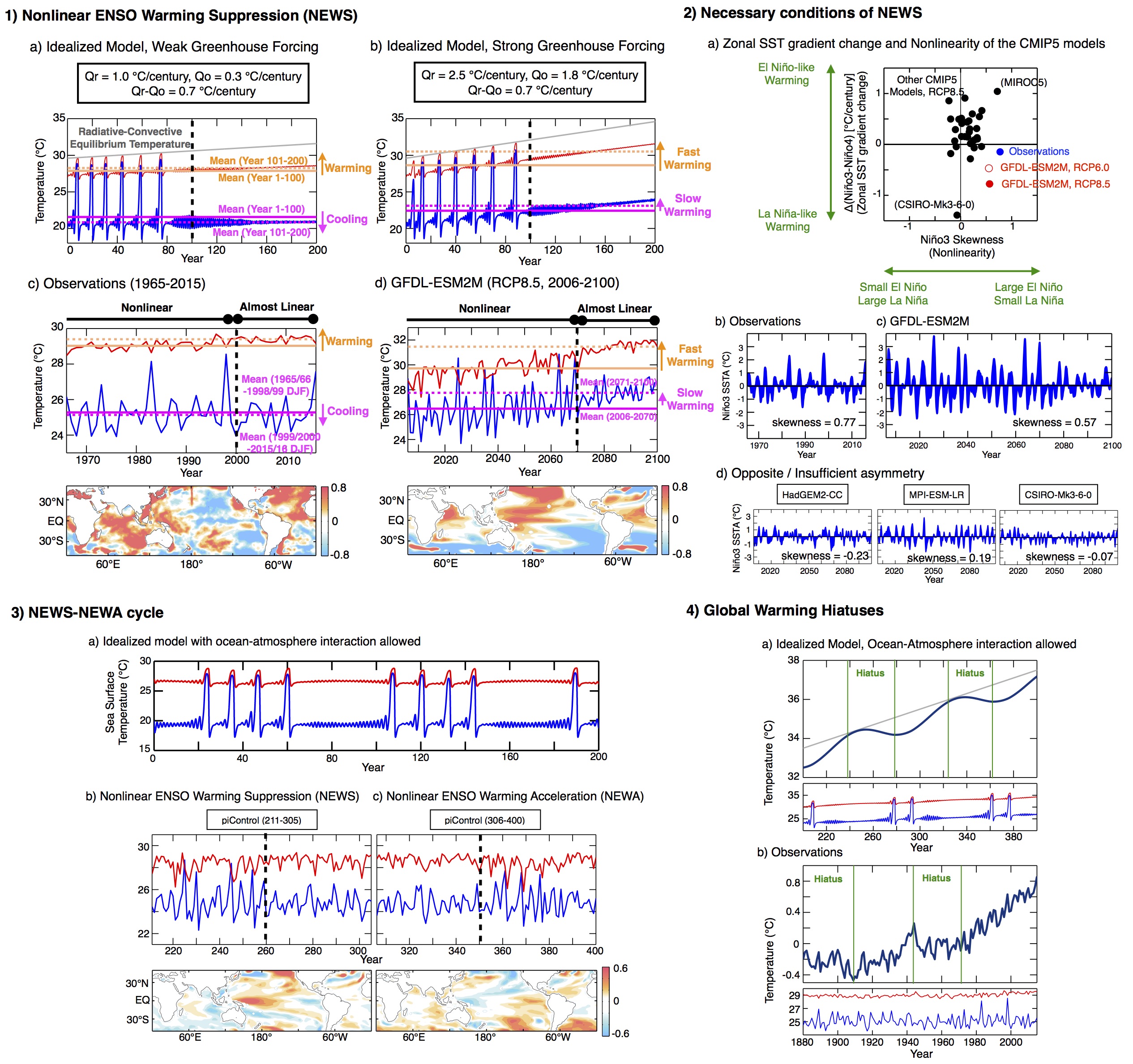