79A European Tornadoes and Climate Change: Is There a Signal?

More
Bogdan Antonescu, University of Manchester, Manchester, United Kingdom; and D. M. Schultz
Although less frequent than tornadoes in the United States, over 300 tornadoes a year are reported in Europe.  The question is whether the number of European tornadoes have changed due to anthropogenic climate change.  Although the systematic collection of tornado reports started in the nineteenth century in Europe, no pan-European system was in place before 2006 (i.e., European Severe Weather Database). Antonescu et al. (2016, Monthly Weather Review) reviewed the European tornado databases between 1800 and 2014 and showed that many of these databases were developed outside the national meteorological services, which resulted "in less certainty for the long-term continuity of the databases”.

To answer this question, we adopt two different datasets.  Our historical dataset is largely based on archived tornado reports collected from individual country’s climatologies during 1800–2005 and is reported in Antonescu et al. (2016).  Our current dataset is derived from the European Severe Weather Database maintained by the European Severe Storms Laboratory during 2006–2015.  These datasets, which contain over 10,000 tornado reports do not reveal any possible influence of climate change. The data are not good enough because tornado data, unlike temperature measurements, are “targets of opportunity” (Brooks 2013) that require the presence of an observed and the existence of a system to collect the reports.

To see the effects of climate change—a change in the number of tornadoes in a future warm climate—we calculate the time of emergence of climate change signals from the noise of the natural climate variability (Hawkins and Sutton 2012).  This calculation reveals how many years of data are necessary to observed a statistically significant increase due to climate change.  The results from these and other explorations of these two datasets will be presented at the conference. 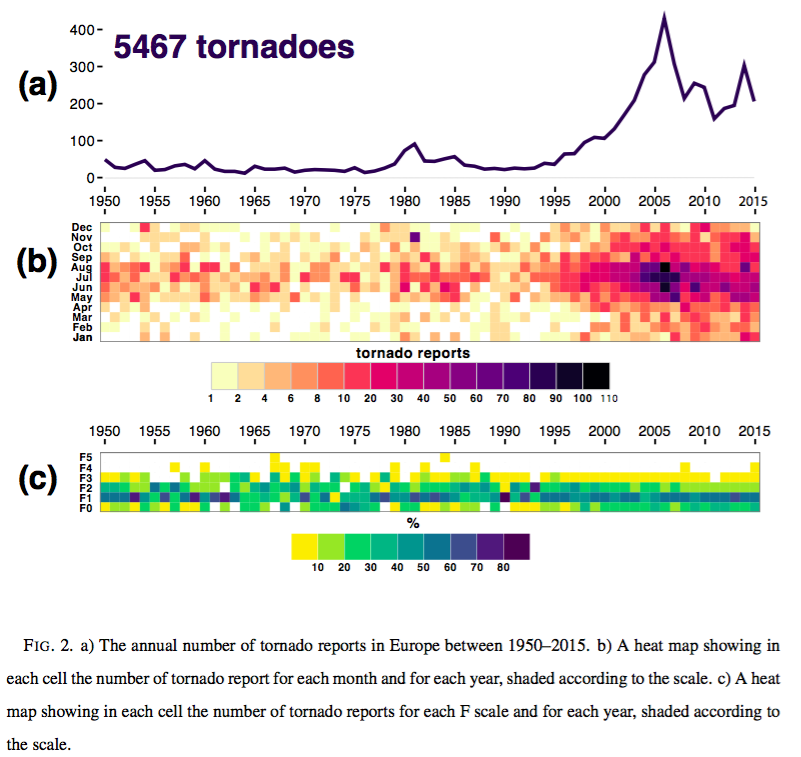