7.3 Ocean Vector Winds in Storms from the SMAP L-Band Radiometer

The Soil Moisture Active Passive Mission SMAP was launched in January 2015 and has been providing science data since April 2015.  Though designed to measure soil moisture, the SMAP radiometer has an excellent capability to measure ocean winds in storms at a resolution of 40 km, with a swath width of 1000 km.  The L-band radiometer V-pol and H-pol channels keep very good sensitivity to ocean surface wind speed even at very high wind speeds and they are only little impacted by rain.  The presence of polarimetric channels, which measure all 4 Stokes parameters on the SMAP radiometer also allows retrieving wind direction.  The SMAP radiometer can measure ocean vector winds above 12 m/s without using observations from the L-band radar, which failed in early July 2015.

We briefly discuss the major features of the SMAP sensor, the geophysical model function that is used in the ocean vector wind retrieval and the basic steps of the retrieval algorithm.  We then present results of the SMAP wind fields in recent very intense tropical cyclones (including PATRICIA, WINSTON, FANTALA and NEPARTAK) as well as some extra-tropical cyclones.  We compare the SMAP results with wind measurements from ASCAT, RapidScat and WindSat, best track data from the Joint Typhoon Warning Center and with NCEP wind fields.

The most important validation source for the SMAP winds is NOAA’s airborne Step Frequency Microwave Radiometer SFMR, whose wind speeds were collocated with SMAP in space and time and resampled to its resolution.  A comparison between SMAP and SFMR winds in hurricanes of the 2015 and early 2016 season, including PATRICIA, which was one of the strongest hurricanes ever recorded, shows excellent agreement up to 65 m/s and no degradation in rain.  This agreement is unique and gives SMAP a distinct advantage over many other space-borne sensors such as C-band or Ku-band scatterometers or radiometers, which either lose sensitivity at very high winds or degrade in rainy conditions.

Remote Sensing Systems has started to produce SMAP winds routinely.  They are available at http://www.remss.com/missions/smap 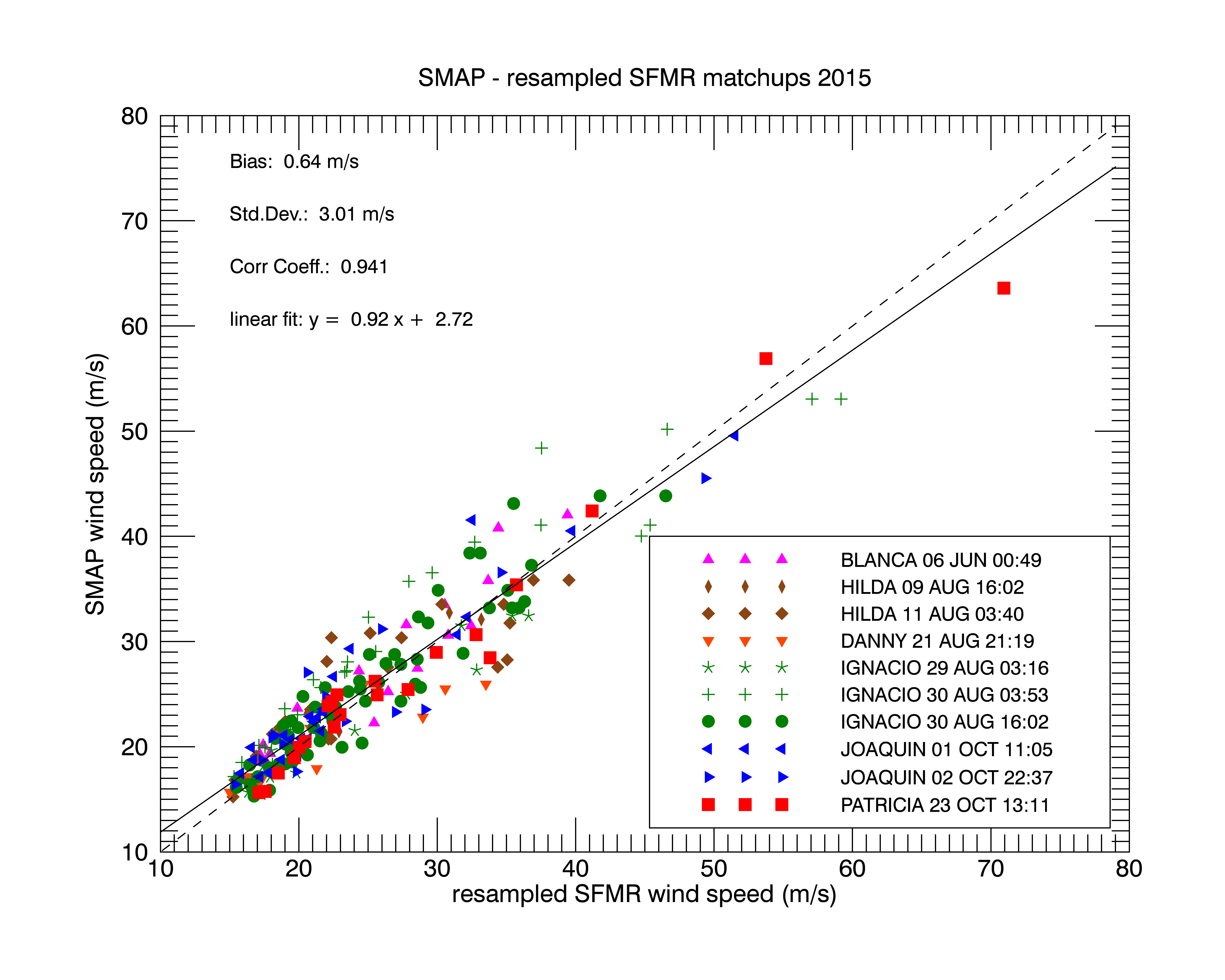