More
4E (Washington State Convention Center )
Michael Schwendeman, University of Washington, APL, Seattle, WA; and J. Thomson
The breaking of surface waves in deep water has been an active topic of research for decades, due to its importance for safety at sea, wave forecasting, and air-sea interactions. Observations of surface waves are commonly made using buoys or other single-point measurements with an assumption of linearity. However, breaking is a fundamentally three-dimensional and nonlinear phenomenon. Therefore, it is still not clear what causes a wave to break or what determines the severity of breaking. In recent years, stereo imagery has emerged as a powerful tool for accurately measuring surface waves in three dimensions. We present measurements of breaking waves in the open ocean, or “whitecaps,” from a ship-based stereo video system. The accompanying figure shows an example whitecap as measured from a pair of stereo images.

The stereo measurements are first shown to compare well with statistical parameters from traditional wave buoy measurements. Next, the breaking waves are detected based on the presence of whitecap foam. The wave steepness (the ratio of wave height to wavelength) has long been thought to be an important factor in the whitecap dynamics, dating back to the discovery of a theoretical limiting wave steepness by Stokes (1880). However, previous measurements in the field, such as Holthuijsen and Herbers (1986), found that the whitecaps were much less steep than the Stokes limit, and only slightly steeper on average than the non-breaking waves. The stereo measurements show, however, that the whitecaps are characterized by localized crests of extreme slope and curvature, rather than anomalous crest-to-trough steepnesses. Examination of the wave profiles during breaking show that the sharp crests of the breaking waves do indeed resemble the 120 degree corner of the Stokes limiting wave (as seen in the accompanying figure). The steep crests are likely formed as a result of nonlinear wave group dynamics, as evidenced by a slowing of the wave phase speed and a convergence of wave energy in the whitecap.

Stereo imaging has the potential to transform observations of ocean waves. Spatiotemporal measurements such as these are particularly useful for studying nonlinear phenomena like wave breaking. Future work should address the issue of wave group dynamics, which will necessitate a wider view of the ocean surface. Fortunately, stereo video is quickly becoming a mature technology for use by non-experts, due to the availability of powerful stereo algorithms in commercial and open-source software packages (such as the Matlab Computer Vision Toolbox and OpenCV). 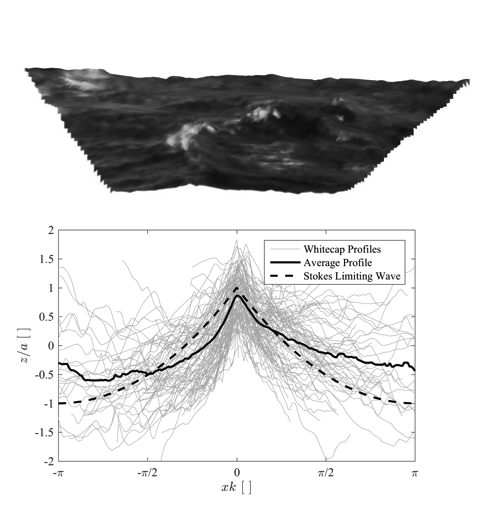