Total column ozone observed by satellite on February 19, 2010, increased by 250 DU from 325 to 575 DU (>75%) in a plume above Eyjafjallajökull volcano in southern Iceland extending eastward past Novaya Zemlya and laterally from northern Greenland to southern Norway (http://youtu.be/wJFZcPEfoR4). This plume was still clearly visible on March 1. During this period, ground deformation and rapidly increasing numbers of earthquakes imply that magma began rising from a sill 4 to 6 km below the volcano that first erupted on March 20. Whether the ozone came from the magma or from the effect on water and/or biota by very hot gases rising through cracks in the ground is unclear, but the volume emitted from this point source was surprisingly large. Monthly average total column ozone measured at Arosa Switzerland in March, April, and May increased 29, 22, and 24 DU compared to monthly averages for the previous 10 years. On February 20-22, 1991, similar increases in ozone were observed north of Pinatubo volcano before its initial eruption on April 2 (http://youtu.be/5y1PU2Qu3ag). Annual average total column ozone during the year of most moderate to large explosive volcanic eruptions since routine observations of ozone began in 1927 has been substantially higher than normal. Increased total column ozone absorbs more solar ultraviolet-B radiation, warming the ozone layer and cooling Earth.

The June 1991 eruption of Pinatubo, the largest volcanic eruption since 1912, ejected megatons of sulfur dioxide and water vapor into the lower stratosphere where they formed a sulfuric-acid aerosol that spread worldwide providing aqueous surfaces on which heterogeneous chemical reactions enhanced ozone depletion. Annual average total column ozone at Arosa dropped during 1992 and 1993 from a pre-1970 average of 331 DU, to 305 and 300 DU, the lowest values observed since observations began. Ozone depletion allows more ultraviolet-B radiation to reach Earth causing warming. Warming up to 4oC was observed in Canada, northern Europe, and Russia for December 1991 through February 1992. Soon thereafter, however, the aerosol droplets grew large enough to reflect and scatter solar radiation, cooling Earth approximately 0.5oC over the next two years.

Temperature anomalies in the northern hemisphere rose 0.7oC in 28 years from a 1946-1970 average of -0.05oC to a 1998-2013 average of 0.61oC (HadCRUT4), while annual average ozone at Arosa dropped 27 DU because of manufactured CFC gases. Beginning in August 2014, temperature anomalies in the northern hemisphere rose another 0.6oC in less than two years apparently because of the 6-month eruption of Bárðarbunga volcano in central Iceland, the highest rate of basaltic lava extrusion since 1783, a truly exceptional event. Large extrusions of basaltic lava are typically contemporaneous with the greatest periods of warming throughout Earth history. 2016 is becoming the warmest year in the instrumental record.

Ozone concentrations are always changing by the minute, day, season, and region, and have been observed over Toronto to increase from 300 to 380 DU in 6 hours, lowering the height of the tropopause from 13 to 8 km. Change by season at Arosa is typically from an average of 370 DU during March and April to 285 DU in October. Removing this seasonal change to calculate ozone anomaly and plotting against temperature anomaly and climate oscillation indices for the Northern Annular Mode (NAM), the Southern Annular Mode (SAM), the El Niño Southern Oscillation (ENSO), and the North Atlantic Oscillation (NAO) shows how volcanic eruptions appear to influence regional temperatures, pressures, winds, weather, and climate.

Based on satellite data (SBUV) between 1998 and 2013, total column ozone north of 45oN decreased annually from a range of 365-410 DU in March to a range of 285-305 DU in October, at the equator increased from 235-265 DU in February to 255-280 DU in October, and south of 45oS increased from 265-280 DU in March to 330-365 DU in September, but monthly averages vary greatly in time and by region. Ozone is created when solar ultraviolet-C radiation dissociates oxygen releasing heat. Ozone is destroyed when solar ultraviolet-B radiation dissociates ozone also releasing heat in the endless Chapman cycle. Thus the presence of ozone indicates heating of the local air mass. Increased concentrations of ozone warm the ozone layer and cool Earth, raising polar air pressure. Decreasing ozone cools the ozone layer, warms Earth, decreasing polar pressure and, in the Arctic, strengthening the polar vortex, causing the jet stream to meander more. Total column ozone concentrations are always changing in both time and in location and volcanic eruptions appear to be a primary cause. A 40 DU global decrease in average ozone appears to warm Earth approximately 1oC.

Weather is driven primarily by the temperature difference between the hot tropics and the cold poles with flow diverted by the Coriolis force. Warm oceans are evaporated during the day while high pressure zones are built up over continents, forming, for example, the Walker circulation with winds blowing from high pressure, cool, dry air over Peru and Ecuador to warm, wet, low pressure air over islands in the Indonesian region, pushing sun-warmed water westward. When the pressure difference decreases, El Niño conditions prevail. The Multivariate ENSO Index (MEI) tends to increase from December through May. Sudden increases in ozone during this time increase the MEI much more rapidly. Cooling caused by volcanic aerosols tends to decrease the MEI preventing major El Niños in 1982-1983 and 1991-1992 from developing as strongly and as soon as other major El Niños. My talk will emphasize observations of changes in ozone related to indices for atmospheric circulation including the NAM, NAO, ENSO, and SAM.

Atmospheric chemistry and circulation result from complex interactions of many variables on rapid time scales. We still have much to learn. Recognizing that 3000 documented volcanic eruptions since 1927, 64 with Volcanic Explosivity Indices (VEI) >=4, have regularly and randomly stirred the pot provides more specific explanations than simply invoking “natural variabilities”. The atmosphere was formed by volcanoes and they appear to have a dominant effect not only on climate change throughout Earth history, but also on weather. Volcanoes rule! WhyClimateChanges.com 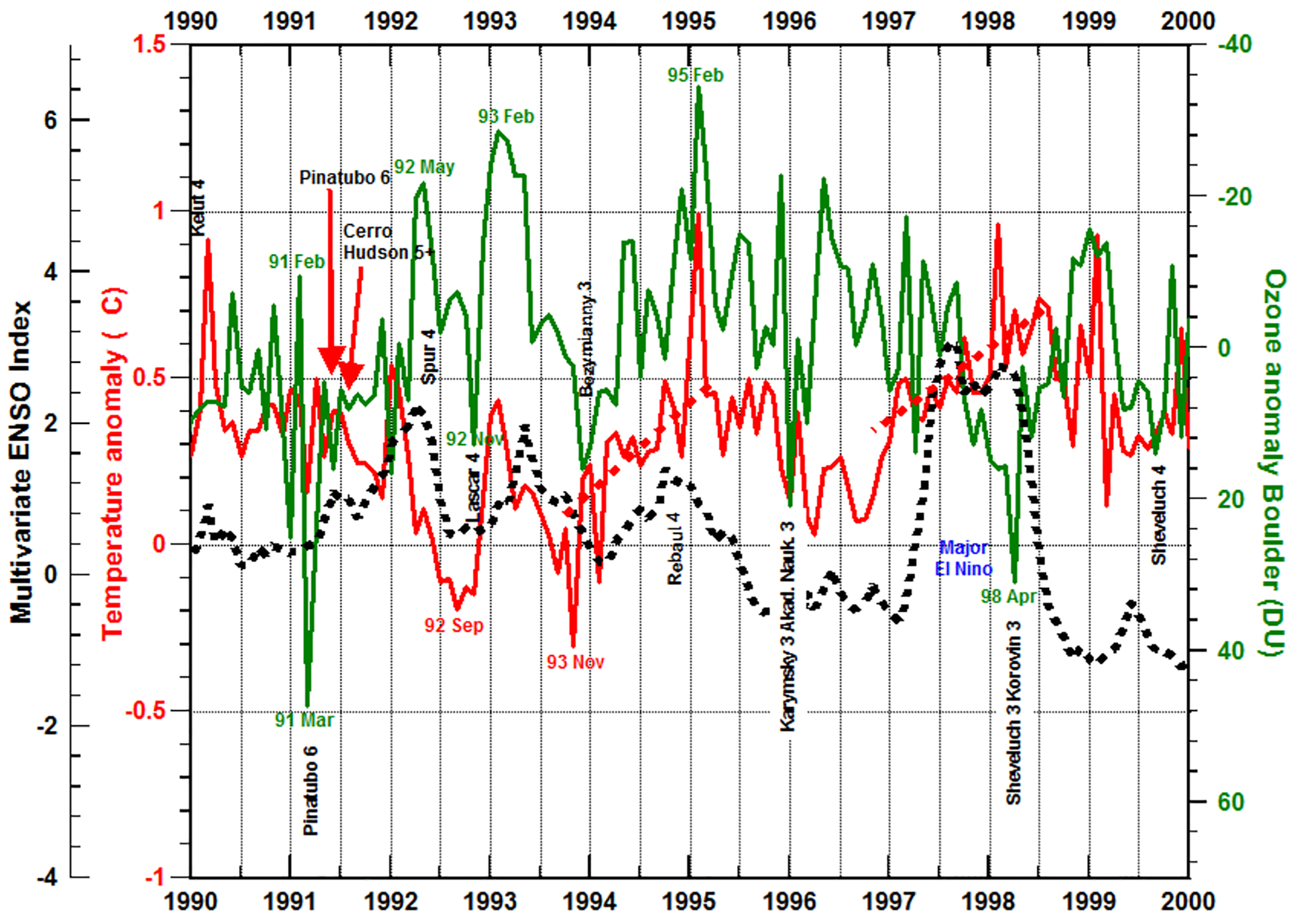