More
605 (Washington State Convention Center )
René D. Garreaud, Universidad de Chile, Santiago, Chile; and R. Rondanelli and J. P. Boisier
Recorded Presentation
Annual precipitation deficits ranging from 30-70% have afflicted most of central Chile (west coast of South America, 30-40°S) for the last decade, most intensely from 2011 onwards, leading to an unprecedented drought in terms of intensity, spatial and temporal extent. The current 'Mega Drought' stands out not only in the historical record but also in precipitation and stream flow reconstructions for the last 1000 years. ENSO is a major driver of central Chile interannual precipitation variability (with La Niña years usually drier than average) but this extended dry period has included both La Niña and El Niño years. Furthermore, the cold phase of the Pacific Decadal Oscillation (PDO) is also associated with less precipitation in central Chile. Indeed, the last decade has exhibited a cold PDO, but the actual precipitation deficit falls well below than expected considering both the instrumental and tree-ring reconstructed periods. Thus, while the ENSO, PDO and internal variability have contributed to the maintenance of the rainfall deficit, there is an strong suggestion that anthropogenic climate change is partially responsible for the present Mega Drought.

Here we use atmospheric-only GCMs (i.e., SST-forced simulations) with either observed or pre-industrial radiative forcing and fully-coupled GCMs with observed radiative forcing (those run in support of the IPCC fifth assessment report) to disentangle natural and anthropogenic contributions to current mega drought as well as to shed light in the physical link between global climate change and rainfall deficit in central Chile drought. We found that anthropogenic-induced precipitation changes in central Chile appears to explain between a quarter and a third of the rainfall deficit during the current mega drought. Such effect is mostly dynamic, due to the decrease in the westerly winds impinging central Chile. We also note that model-based climate projections for the 21st century consistently indicate a marked drying trend over this region.

In this work we also show some of the effects of the Mega Drought in selected physical systems, including natural vegetation, snow pack over the Andes mountains, surface and subsurface hydrology and forest fires. Given the long temporal extent of this events, its effects are distinct from those associated with the intense but shorter droughts that characterize the past century. 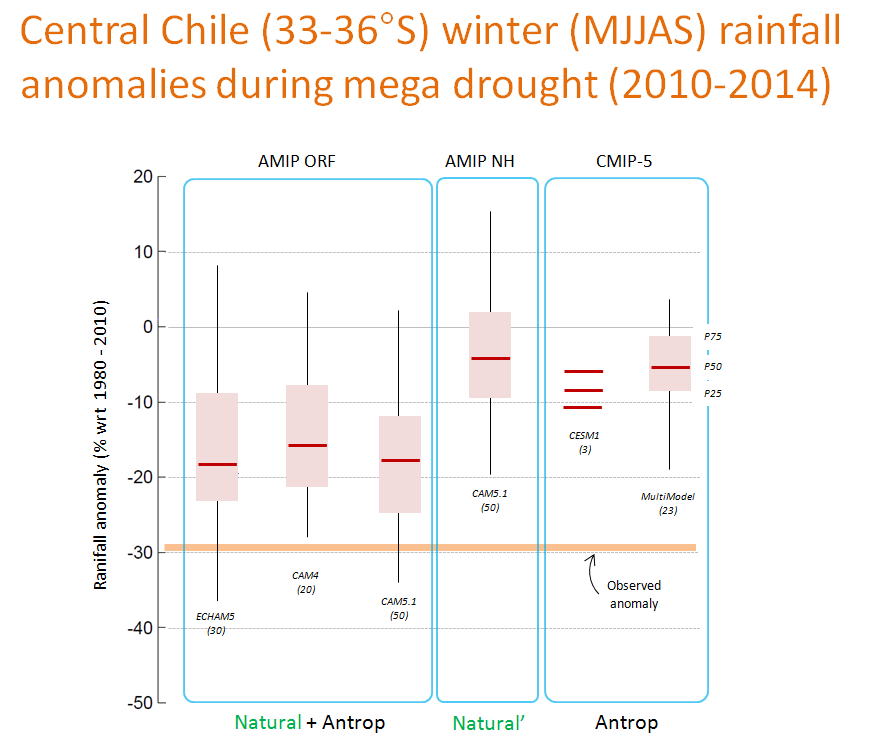