More
Room 17A (ACC) (Austin, Texas)
Louis J. Wicker, NOAA/NSSL, Norman, OK; and D. M. Wheatley, K. H. Knopfmeier, P. L. Heinselman, P. Skinner, J. J. Choate, T. A. Jones, and J. Poterjoy
Recorded Presentation
For the past two years the National Severe Storms Laboratory’s Warn on Forecast program has been testing an adaptive regional-scale rapidly-updating ensemble forecast system to predict severe weather threats. This system is called NEWSe (NSSL's Experimental Warn-on-Forecast System for ensembles) and is composed of a 36 member ensemble analysis system updates every 15 minutes using available surface, radar, and satellite data. NEWSe also then generates a 1.5 or 3 hour long 18-member ensemble forecast every 30 minutes between 19-03Z. In 2017 this real time configuration ran for 6 weeks beginning 1 May. Each day a 750x750 km2 grid was placed over the severe weather threat somewhere in the central or eastern US. Initial and boundary conditions were provided daily from an experimental HRRR ensemble running over the eastern 2/3 CONUS from the Global Systems Division in Boulder CO. Output from the NEWSe was evaluated each day by experienced forecasters within NSSL's Hazardous Weather Testbed Experiment. Overall the results were very encouraging. NEWSe forecasts are often able to identify and forecast the severe storms producing significant weather threats, and occasionally even predict the development of severe weather from the first radar echo. One such day was 16 May 2017, where the Norman NWS forecasters incorporated information from a series of NEWSe forecasts to issue a special weather advisory to emergency managers in western Oklahoma (near Elk City) to prepare for tornadic activity in their local area with nearly 90 minutes of lead time.

Figure 1a shows the 3 hour forecast of ensemble probability matched mean for updraft helicity from the 18-member forecast initialized at 22Z. Two supercells are moving northeast from the TX Panhandle into western OK, with the strongest storm to be near Elk City OK around 00Z. Figure 1b is the observations from the operational Multi-Radar Multi-Sensor (MRMS) system showing the composite reflectivity and a 30-minute swath of radar-derived azmuthial wind shear at 00Z. Clearly the NEWSe forecast correctly depicts the stronger of the two supercells to the south (Fig. 1a) in W. OK, the supercell in KS, but is missing the storm in SW OK.

This case, while intriguing, needs to be placed into some broader context, i.e., how reproducible are these results? To evaluate the sensitivity of the 16 May case a series of experiments are conducted where the microphysics scheme, the observations, and even the ensemble data assimilation method is changed to determine how robust and reliable the convective-scale forecasts for this day are. Initial results show that the forecast of the southern supercell near Elk City is sensitive to the microphysical scheme and to the number and kind of observations included in the data assimilation system. Further exploration of the parameter spaces will be performed to determine why the ensemble forecasts are sensitive to even minor changes. Current and new results will be presented at the conference. 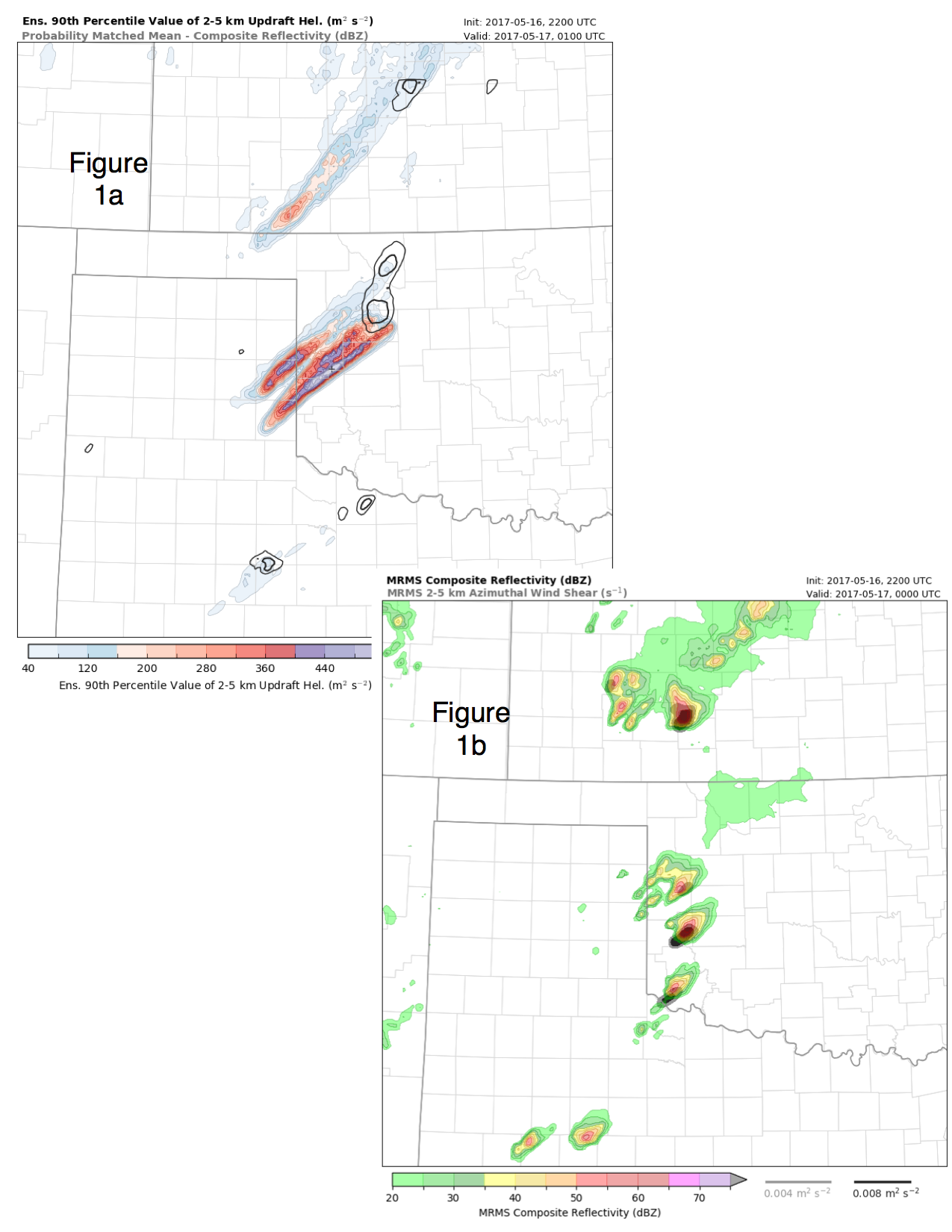