More
Room 18CD (ACC) (Austin, Texas)
Wanmin Gong, EC, Downsview, Canada; and S. R. Beagley, C. Whaley, J. Zhang, G. Wentworth, and J. G. Murphy
Recorded Presentation
Atmospheric ammonia plays an important role in the formation of particulate matter through chemical reactions with acidic gases in the atmosphere. Recent studies have suggested that ammonia (NH3) is a key factor in the formation of new particles in the Arctic marine boundary layer (MBL) from oceanic/biological sources during summer time. Atmospheric ammonia also contributes to the acidification and eutrophication of terrestrial and aquatic systems through deposition. Measurements onboard the Canadian Coast Guard Amundsen icebreaker during an Arctic summer field campaign in 2014 showed elevated NH3 concentrations in the Arctic MBL in areas close to seabird colonies. Enhancements of the NH3 column were also detected by ground-based FTIR spectrometer measurements at a high Arctic site (Eureka, NU) during July and August 2014 when the area was impacted by biomass burning plumes. In this study, we use GEM-MACH, an on-line chemical transport model, to investigate the sources contributing to NH3 in the Arctic atmosphere during summer time. Model simulations were carried out on a regional domain centred over the Canadian Arctic for the period of June-August 2014, and results were compared with the observations. We show that both North American boreal wild fires and emissions from seabird colonies are contributors to periods of high NH3 concentrations observed in the Arctic. The impact of emission from seabird colonies is particularly important in the Arctic summer (due to its intensity and close proximity, given the relatively short atmospheric lifetime of NH3). We also show that NH3 observed in the Canadian high Arctic can be influenced by the North American background level which is better simulated when bi-directional exchange is considered. The impact of the various sources on nitrogen deposition to the Arctic ecosystem will also be discussed. 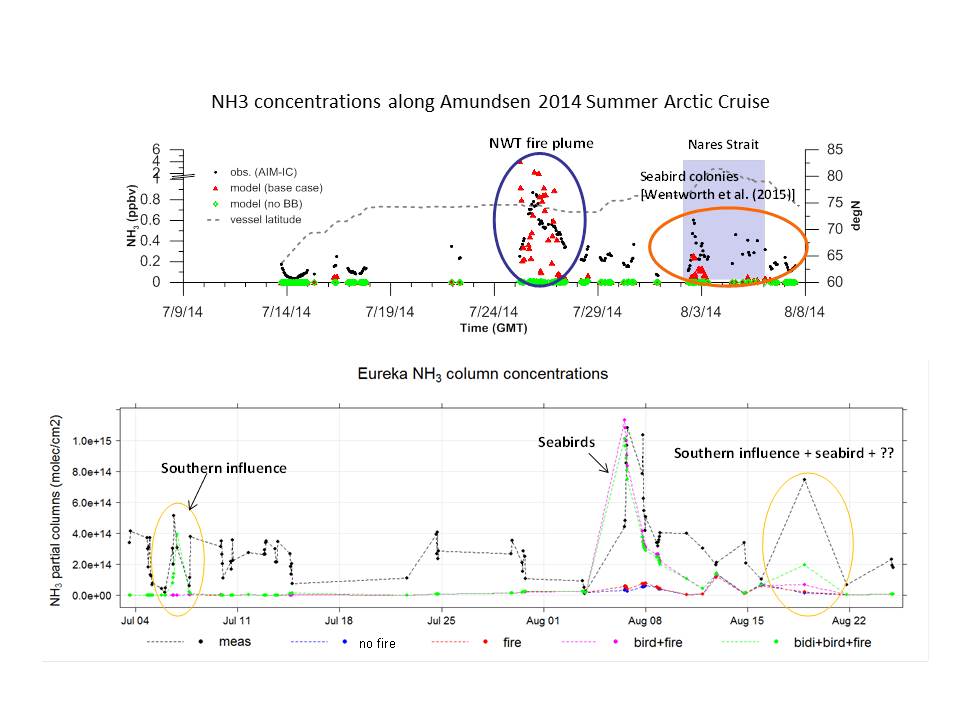