More
410 (Hilton) (Austin, Texas)
Christopher Grassotti, STAR, College Park, MD; and C. L. Perez Diaz and Q. Liu
Recorded Presentation
The Microwave Integrated Retrieval System (MiRS) is the NOAA official microwave-only operational satellite retrieval algorithm, and has been running at NOAA since 2008. The algorithm is based on a 1-dimensional variational approach in which all relevant elements of the atmospheric and surface state are retrieved simultaneously. The official retrieval products from MiRS include temperature and water vapor profiles, surface temperature and emissivity, liquid and frozen hydrometeors, precipitation rate, as well as cryospheric products such as sea ice concentration and snow water equivalent.

One potential advantage of satellite microwave-based retrievals is the ability to measure land surface temperature (LST) with near global coverage over long time periods with a consistent methodology, in both clear and cloudy (non-raining) conditions. Assessment of MiRS LST from Soumi-NPP/ATMS measurements is being conducted with comparison to multiple reference data sets. One of the reference sets is the SURFRAD ground-based network over the US, which includes measurement of upwelling and downwelling longwave fluxes, from which LST can be derived. Comparisons were performed over a 13 month period (May 2016 – May 2017) for six SURFRAD locations over the US (Nevada, Illinois, Montana, Mississippi, Pennsylvania and South Dakota). Only data which were precipitation-free as determined from MiRS were included. Data were analyzed to characterize differences with SURFRAD as a function of overpass time (day/night), season, location, scan position (satellite zenith angle), water vapor amount, and presence of snow. Additional analysis was done to determine the impact of surface emissivity errors on LST differences. The results show that performance is consistent between stations, which are located in widely different climatic zones, and with quite different surface characteristics. Overall, the bias, standard deviation, and correlation are -1.8 K, 5.3 K, and 0.92, respectively. Given that comparison between satellite microwave measurements and surface-based infrared measurements of LST are expected to have some disagreement due to differences in spatial and spectral sampling characteristics (i.e. representativeness error), the level of agreement is encouraging. 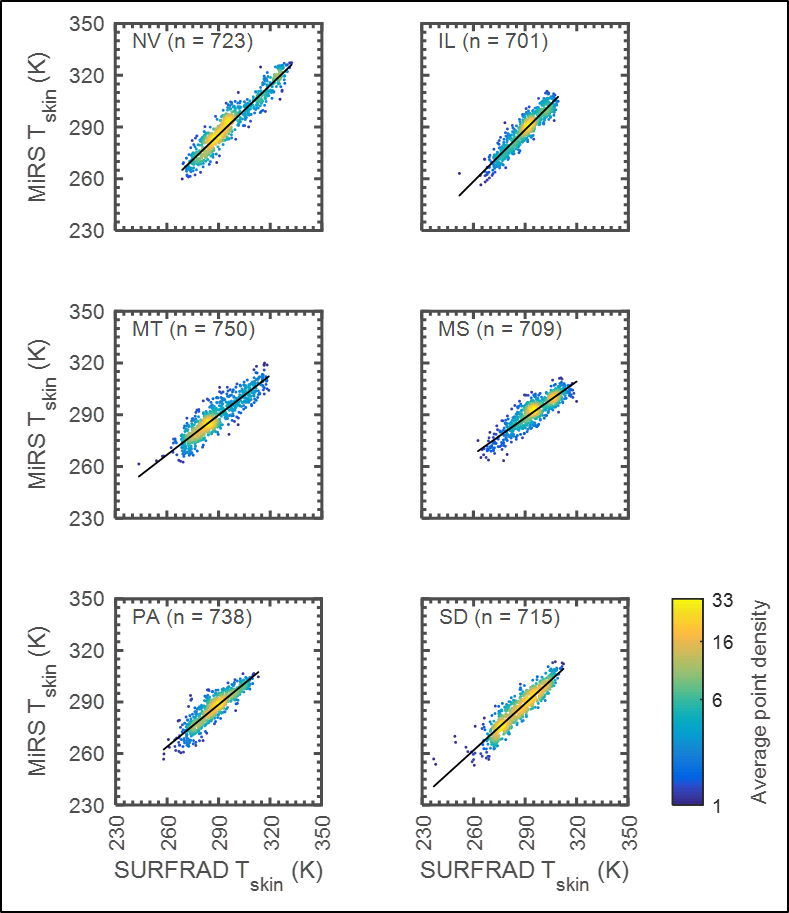