J5.5 Simulation of Temporal Observations by the TEMPEST CubeSat over a Hailstorm in the Dallas–Fort Worth Area

The primary objective of this study is to simulate the time variability of observations at the TEMPEST millimeter-wave frequencies over a convective event in the U.S. Southern Great Plains. This paper focuses on an example of a hail storm over the Dallas Fort Worth (DFW) area. The Weather Research and Forecasting (WRF) model is used to simulate the storm to obtain the surface properties and vertical profiles of temperature and hydrometers, which are used as inputs to the Radiative Transfer Model (RTM) simulation that in turn estimates brightness temperatures (TBs). The High-Resolution Rapid Refresh (HRRR) model hourly analysis is used to determine the initial and boundary conditions for the WRF model to simulate the storm. Figure 1 shows the model-simulated storm reflectivity and NEXRAD KFWS radar estimated reflectivity on March 17, 2017 at 15 UTC. From Figure 1 one can observe good agreement between the model simulations and observations, except for a small spatial shift.

The first part of this work focuses on simulating temporal variability of TEMPEST observations from WRF model profiles. The temporal variability of TBs at all five millimeter-wave frequencies is estimated at a specific location (33.4 deg. N, 97.3 deg. W) within the model domain. The model indicates the time variability to be measured at the TEMPEST frequencies by a decrease in TBs from 280 K to 220 K when the storm passes over a specific location. In the second part, the vertical profiles of precipitating hydrometers derived from the KFWS radar is combined with non-precipitating parameters from the WRF model simulations to study the impact of precipitation processes on TEMPEST observations. While this step has to be carried out carefully in assimilation ground radar observations, this simple study shows the impact of cloud microphysics. Figure 2 shows the temporal variability of TBs at the same grid point from the second part and the TBs drop from 280 K to 180 K at around 13:40 UTC.

Replacing WRF generated precipitating hydrometers with radar retrievals is a simple but direct study to determine the impact of radar derived hydrometers on the temporal variability of TBs. To refine this process, we also generate a high-resolution reanalysis from WRF model simulations through radar data assimilation. The 3DVAR technique is used to assimilate the radar radial velocity and reflectivity data. The Method for Objective Based Diagnostic Evaluation (MODE) is used to evaluate the impact of the data assimilation and further improve the complete simulation process. The results presented show the significant impact of the storm microphysical evolution on the TEMPEST-D observations. 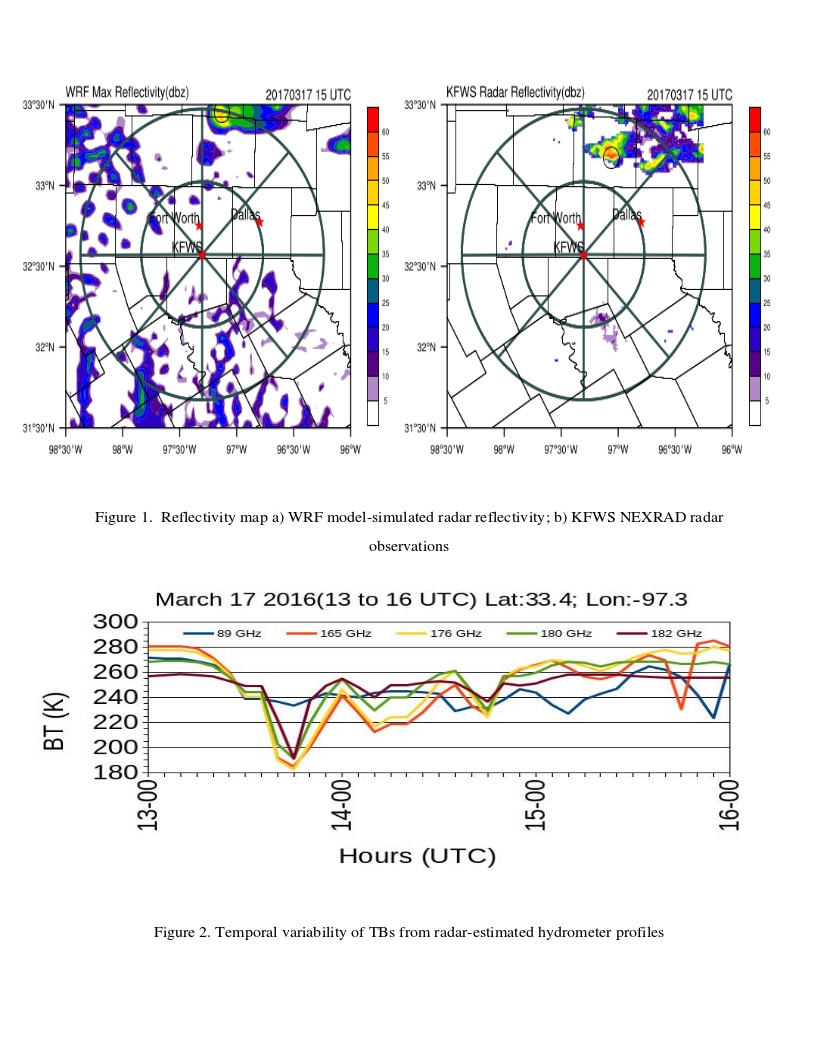