320295 Irradiance Levels and Hourly Temperature: Evidence from the Arctic

While average net outward irradiance levels at Barrow have declined, average in situ temperature readings at Barrow have trended upward over the period 1977 through 2016. The research question in this paper is whether a portion of the upward trend in temperature at Barrow can be attributed to the decline in the net outward longwave irradiance level at this same location. It is possible that the empirical findings may reduce some of the controversy over the issue of global climate change.

The study employs data reported by the Barrow Observatory (BRW) over the period 1 January 2008 through 31 December 2016. BRW is an atmospheric station of the Earth System Research Laboratory (ESRL), Global Monitoring Division (GMD), of the National Oceanic and Atmospheric Administration (NOAA). The hourly temperature data were downloaded directly from the ESRL website (https://www.esrl.noaa.gov/gmd/dv/data ). Downward total solar irradiance, upward solar irradiance, downward longwave irradiance, and upward longwave irradiance data for each minute were also downloaded from the ESRL website and converted into hourly values.

In terms of methodology, a two-step time-series estimation approach is employed. In the first step, the presumption of linearity in terms of the explanatory variables (e.g. the hourly level of downward total solar irradiance) is scrutinized. Based on this analysis, a number of the explanatory variables are entered into the multivariate model with nonlinear specifications.

The purpose of the second step in the estimation is to obtain parameter estimates that give rise to a white noise error structure that also has the property of asymptotic normality. The resulting estimating equation has a structural component driven by the irradiance variables in conjunction with the binary variables for the hour of the day and season. There is also an autoregressive component that takes into account that the temperature in hour t is not independent from the temperature in hour t-1, t-2, t -3, … t-k where k is the maximum lag incorporated into the model. Step two of the estimation is accomplished by making use of an autoregressive conditionally heteroscedastic (ARCH) model. This is a useful method in modeling times series data that exhibit time-varying volatility i.e. periods of turbulence (e.g. storms) followed by periods of relative calm. The conditional heteroskedasticity in this case is modeled as a function of the square roots of the lagged irradiance levels and the binary variables. The second step in the modeling also makes use of an autoregressive–moving-average with exogenous inputs model specification (ARMAX) with the transformed irradiance variables and the seasonality variables from the first step being included as the exogenous inputs and where the disturbance terms are presumed to follow an autoregressive moving-average (ARMA) specification.

The transformed equation is estimated under the assumption that the standardized residuals correspond to the Student t distribution. This distribution allows for more kurtosis than the Gaussian distribution. The advantage of using this approach is the resulting asymptotic normality of the maximum likelihood estimators ensures that the tests of statistical significance will be meaningful. As a further precaution, the standard errors for the coefficients are based on the full Huber/White/sandwich formulation and thus the estimates of variance are robust to symmetric nongaussian disturbances.

The multivariate estimation yields a statistically significant relationship between the irradiance levels and hourly temperature. The estimated model is used to generate out-of-sample hour-ahead temperature predictions for each hour over the period 1 January 2013 – 31 December 2016. The preliminary out-of-sample predictions have a root-mean-squared error of approximately 0.77 o C. 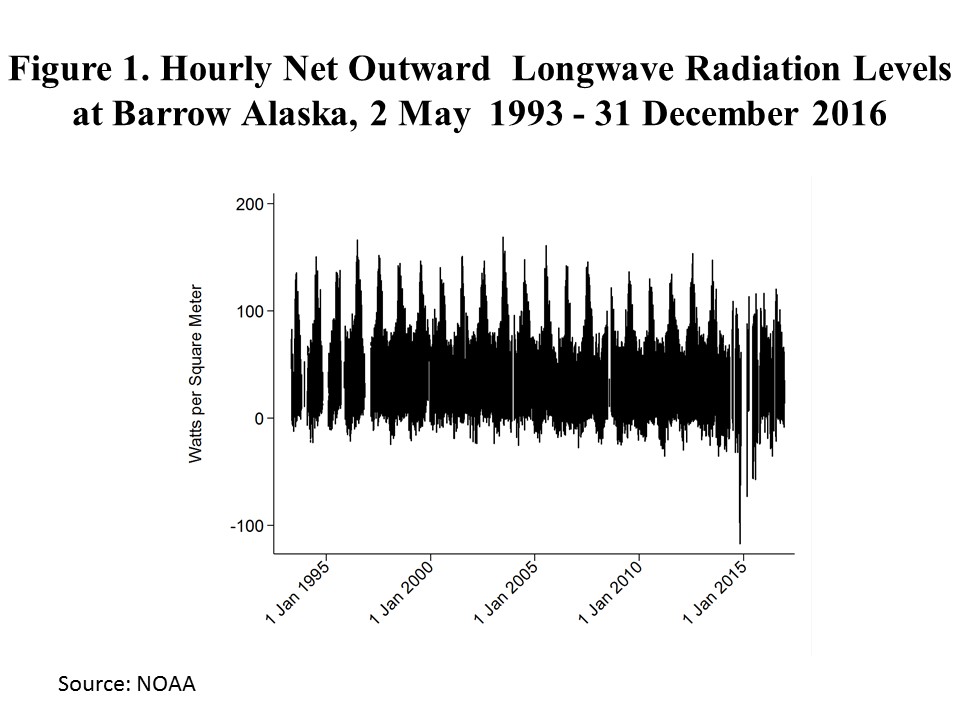