15A.1 Throughout the Holocene, Extensive Basaltic Lava Flows that Formed Primarily in Sub-Aerial Rift Zones and Covered Hundreds of Square Kilometers of Land were Contemporaneous with Short Periods of Major, Rapid, Global Warming

Throughout Earth history, continental rifting has led to extensive, sub-aerial, basaltic lava flows that have been contemporaneous with rapid global warming, extreme ocean acidification from sulfur dioxide emissions, and major mass extinctions. They typically have caused environmental crises that end geologic eons, eras, periods, epochs and even ages (Courtillot and Renne, 2003). Around 251 Ma (million years ago), basalts covered 7 million km2 of Siberia (an area equal to 87% of the contiguous United States) probably within 670,000 years, causing equatorial oceans to become highly acidic with temperatures >40°C. Approximately 96% of all marine species and 70% of all terrestrial vertebrate species went extinct in an environmental crisis mapped globally as the end of the Paleozoic era. Around 201 Ma, basalts erupted in the Central Atlantic Magmatic Province as North America and Africa rifted apart, forming the Atlantic Ocean and covering roughly 11 million km2 of land, probably within 600,000 years, forming the second largest known mass extinction, and ending the Triassic period. Around 66 Ma, the Deccan basalts covered an area of 0.5 million km2 in India causing warming and, with the help of an asteroid, the third largest known mass extinction that formed the end of the Mesozoic era. Around 56 Ma, rifting of Norway from Greenland extruded as much basalt as 3000 km3 per km of rift per million years, forming the Paleocene Eocene Thermal Maximum. Ernst (2014) documents 211 such Large Igneous Provinces (LIPs), 43 within the past 540 Ma.

Throughout the Holocene, as shown in the figure, much smaller basaltic lava flows appear to have been contemporaneous with periods of rapid, major global warming primarily in Iceland and in the vicinity of the Craters of the Moon National Monument within the Snake River Plain of south central Idaho. The Great Þjórsá Lava, covering 970 km2 of Iceland, led to major warming around 8600 BP (before present). The King’s Bowl and Wapi lava fields covered 700 km2 of the Snake River Plain around 2050 BP during the Roman Warm Period. Basaltic lava from the volcano Eldgjá covered 800 km2 of Iceland around 939 AD, associated with the Medieval Warm Period. Less well-documented basalt flows in Iceland and/or Idaho formed during warm periods around 9665, 7765, and 6842 BP. There is still a great deal of work needed mapping and dating major basaltic lava fields. Basalts from the Laki eruption in Iceland in 1783 covered an area of 565 km2 in eight months but included ten explosive eruptions that formed global cooling aerosols, as discussed below, complicating the climate response.

The much smaller volcano Bárðarbunga in central Iceland erupted 85 km2 of basalt in 6 months starting in late August 2014, the largest basalt flow since 1783, contemporaneous with sudden warming in the northern hemisphere of 0.47oC (HadCRUT4) from 2014 to 2016. The average rate of flood-basalt areal coverage was 0.5 km2 per day.

Kilauea volcano in Hawaii is a nearly continuous source of basaltic lava but the rates of extrusion are typically low. For example, lava from the Puu Oo vent only covered an area of 117 km2 in 23.5 years from 1983 to 2007. The ongoing Kona eruption, on the other hand, has been extruding basalts covering 0.6 to 0.4 km2 per day for more than three months from May 3 through August 7, 2018, when this abstract was written. If this eruption continues for another 3 months, it could affect climate as much as Bárðarbunga. It is possible, but not yet proven, that the Kona eruption is affecting the record breaking high temperatures this summer.

Basaltic eruptions emit especially high volumes of chlorine and bromine gases, which are observed to cause ozone depletion. The exact chemical path causing ozone depletion is not yet well understood. Ozone depletion allows more ultraviolet-B solar radiation than usual to reach Earth, warming Earth and cooling the lower stratosphere as observed. Ultraviolet-B radiation is hot enough to burn skin and is 48 times hotter than infrared radiation absorbed strongly by CO2. Heat waves during the summer of 2018 are associated with a “sharply kinked” jet stream often thought to be caused by ozone depletion.

The greatest ozone depletion observed since records began in 1927 was in 1992 and 1993, following the 1991 major explosive eruption of Mt. Pinatubo in the Philippines, the largest since 1912. From December 1991 through February 1992, temperatures were as much as 3oC warmer than usual in central North America and northern Europe due to ozone depletion. However, major explosive eruptions eject megatons of water vapor and sulfur dioxide into the lower stratosphere, where they form aerosols that reflect and scatter sunlight, causing net global cooling of about 0.5oC for two to three years.

Humans also caused ozone depletion by manufacturing large amounts of chlorofluorocarbon gases (CFCs) beginning in the 1960s. Global temperatures had remained nearly constant from 1945 to 1970. Ozone depletion and global temperatures began increasing around 1970. The Montreal Protocol on Substances that Deplete the Ozone Layer limiting production of CFCs took effect in 1989. By 1993, the increases in CFC production stopped. By 1995, the increases in ozone depletion stopped. By 1998, the increases in temperature stopped. Annual, average temperatures remained relatively constant from 1998 through 2013, a period known as the global warming hiatus. Temperatures then began to rise at a much higher rate during the eruption of Bárðarbunga, reaching a peak in 2016. Meanwhile, concentrations of CO2 in the atmosphere rose constantly since 1945, showing no relation to these well-observed changes in temperature trends. 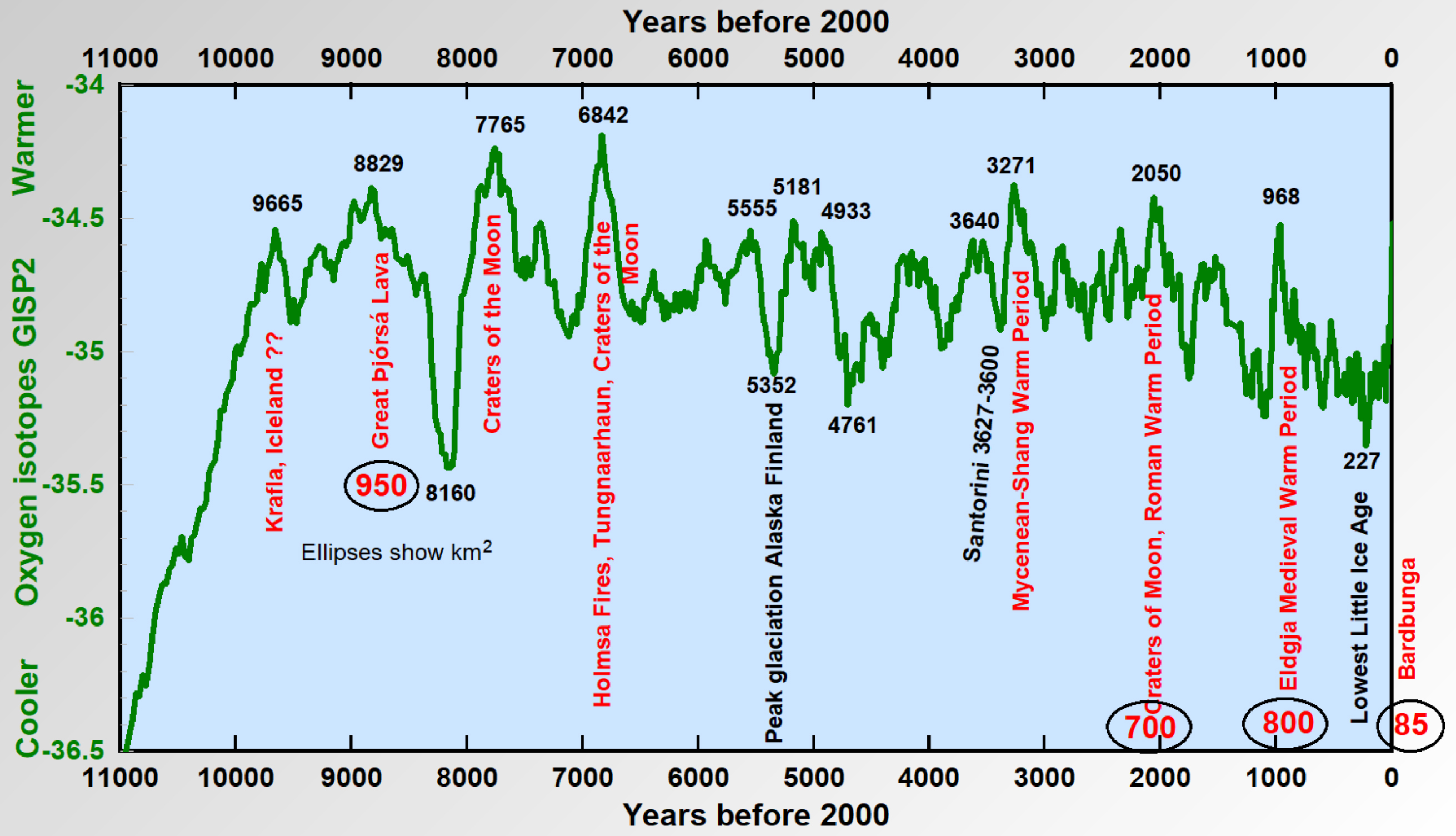