Ocean surface currents impact heat transport, surface momentum and gas fluxes, ocean productivity and marine biological communities, as well as social impacts on shipping and disaster management. Ocean vector winds are a key variable governing the transfer of momentum, gases, and latent heat between the atmosphere and the ocean. The ability to simultaneously measure ocean winds and currents would improve the accuracy of both individual measurements, as there is an intrinsic two-way coupling between them.

DopplerScatt is a Ka-band pencil beam conically scanning airborne scatterometer which was developed under ESTO’s Instrument Incubator Program (IIP). The airborne architecture is scalable to space to form the basis of the next-generation spaceborne Earth Science Mission aimed at better understanding climate, weather and ocean circulation. The instrument has completed 3 sets of flights in 2016/2017. These were engineering flights near Monterey bay CA, the area around Columbia river mouth in Portland OR and two large scale experiments SPLASH (Submesoscale Processes and Lagrangian Analysis on the Shelf http://carthe.org/splash/) and KISS (Keck Institute for Space Studies http://kiss.caltech.edu/techdev/seafloor/seafloor.html). During the SPLASH experiment a large number of surface drifters were deployed in the area sampled by DopplerScatt while at the same time high-resolution surface current models were run. We will present the instrument concept, its architecture, some of the results from the SPLASH campaign experiment and include a discussion of measurement validation efforts so far. 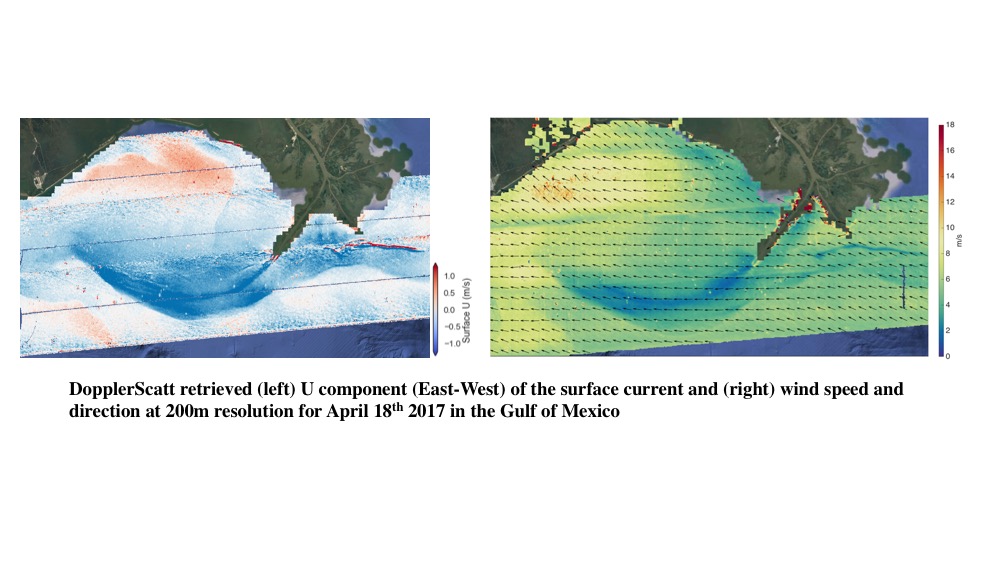