More
Room 4ABC (ACC) (Austin, Texas)
Lonnie G Thompson, Ohio State Univ., Columbus, OH; and T. Yao, M. E. Davis, E. Mosley-Thompson, and S. E. Porter
Recorded Presentation
Glaciers serve both as recorders of past climate variations and early indicators of future climate changes, and their history and fate provide a global perspective for the current warming trend. Over the past 40 years climatic and environmental histories have been recovered from cores drilled on ice fields from the Polar Regions to the Tropics. These proxy records, many extending back beyond the middle Holocene and a few into the Last Glacial Stage (LGS), have made it possible to compare LGS climate in the Tropics with that in the Polar Regions. High resolution records of stable isotopes of oxygen (δ18O) are particularly valuable and demonstrate that since the latter half of the 20thcentury, some global-scale climate changes are unprecedented relative to the last two millennia, especially with respect to rapid oceanic, atmospheric and land surface warming. However, at many sites in the low and middle latitudes the early Holocene was warmer and/or drier than today. The effects of atmospheric and/or oceanic phenomena, such as the El Niño-Southern Oscillation (ENSO), North Atlantic Oscillation, Atlantic Multidecadal Oscillation, Asian Monsoons, South American Summer Monsoon, and Intertropical Convergence Zone (ITCZ) migration, on glaciers and ice fields have been reconstructed from stable isotope, aerosol, and net accumulation records from ice cores. In addition, large-scale teleconnections across the Pacific Basin, linked through ENSO variations and ITCZ movement, have been elucidated over the last 1000 years by comparison of ice core records from the tropical Andes and the Himalaya.

Data on the effects of the rates of change in temperature and precipitation on the cryosphere are urgently needed to model the future of the ice fields in climatically vulnerable regions such as the Tibetan Plateau and the Andes where large populations depend in part on ice-derived water for agriculture and energy production. One of Earth’s least studied areas is the Third Pole (TP), which is centered on the Tibetan Plateau and its bordering mountain ranges. Referred to as “Asia’s water tower”, this large (5 million km2), high landmass contains ~46,000 glaciers covering over ~100,000 km2. The large South Asia river systems that arise from these glaciers sustain ~1.5 billion people in 10 countries (Fig. 1). The TP is home to millions of people and provides the resources they need for daily life. Because it is the largest and on average the highest (>4000 meters above sea level) of Earth’s elevated regions, the TP plays a significant role in regional and global environmental changes, and in Earth’s climate system. The latent and sensible heat over the Tibetan Plateau, along with the winter/spring snow cover, are interconnected with North Atlantic and tropical Pacific oceanic/atmospheric processes, and collectively all these systems drive the intensity and onset of the Asian monsoons. These connections can be demonstrated by integrating ice core climate records with reanalysis data and ocean/atmosphere indices.

The complexity and diversity of the Tibetan Plateau are revealed by climate records reconstructed from the analyses of ice cores recovered over the last three decades from several glaciers. The most recent program was the 2015 re-drilling to bedrock of the Guliya ice cap (originally drilled to bedrock in 1992) in the remote western Kunlun Mountains where the climatic regime is dominated by continental westerlies just north of the limit of the direct influence of the Indian Summer Monsoon. Of all the ice fields investigated to date on the TP, Guliya is by far the oldest, extending back more than 130 ky (Fig. 1, right). For various reasons the bottom 40 meters of the 1992 deep core could not be dated, which should be rectified by the analyses of the 2015 deep core. The longevity of this ice field arises largely from its very low net accumulation (~200 mm water equivalent/yr) and its location far from direct monsoon influence. The δ18O records over the last millennium, along with similar data from four other ice fields around the Tibetan Plateau (Fig. 1), show large-scale regional differences between the monsoon-dominated Himalaya and the arid continental north. Shifting the focus to the last century the decadal-scale δ18O and net balance records show meridional differences in precipitation trends and a warming which dominates the climate over this period. Although this warming is consistent across the TP region, the rate is elevation dependent with greater warming over the higher altitude glaciers in the Himalaya relative to the lower elevation glaciers to the north.

Observations of glacier retreat during the 20th and 21st centuries have been made in the TP, the Andes, East Africa (Kilimanjaro) and near Puncak Jaya, Indonesia. Ice cores from these glaciers confirm their continuous existence ranging from hundreds to thousands of years, suggesting that the current climate conditions are different from those under which they originated and have been sustained. Thus, the current warming is unusual when viewed from the millennial-scale perspective provided by proxy records and the 160-year record of direct temperature measurements. The ongoing, widespread melting of non-polar mountain glaciers provides strong evidence that a large-scale, pervasive and relatively rapid change in Earth’s climate system is underway. Ice core analyses and glacier monitoring by satellite and in situ techniques provide critical perceptions of modern climate change and the potential economic and societal impacts of dwindling water resources on glacier-dependent nations, as well as information on geo-hazards triggered by collapsing glaciers, avalanches, and glacial lake outbursts. 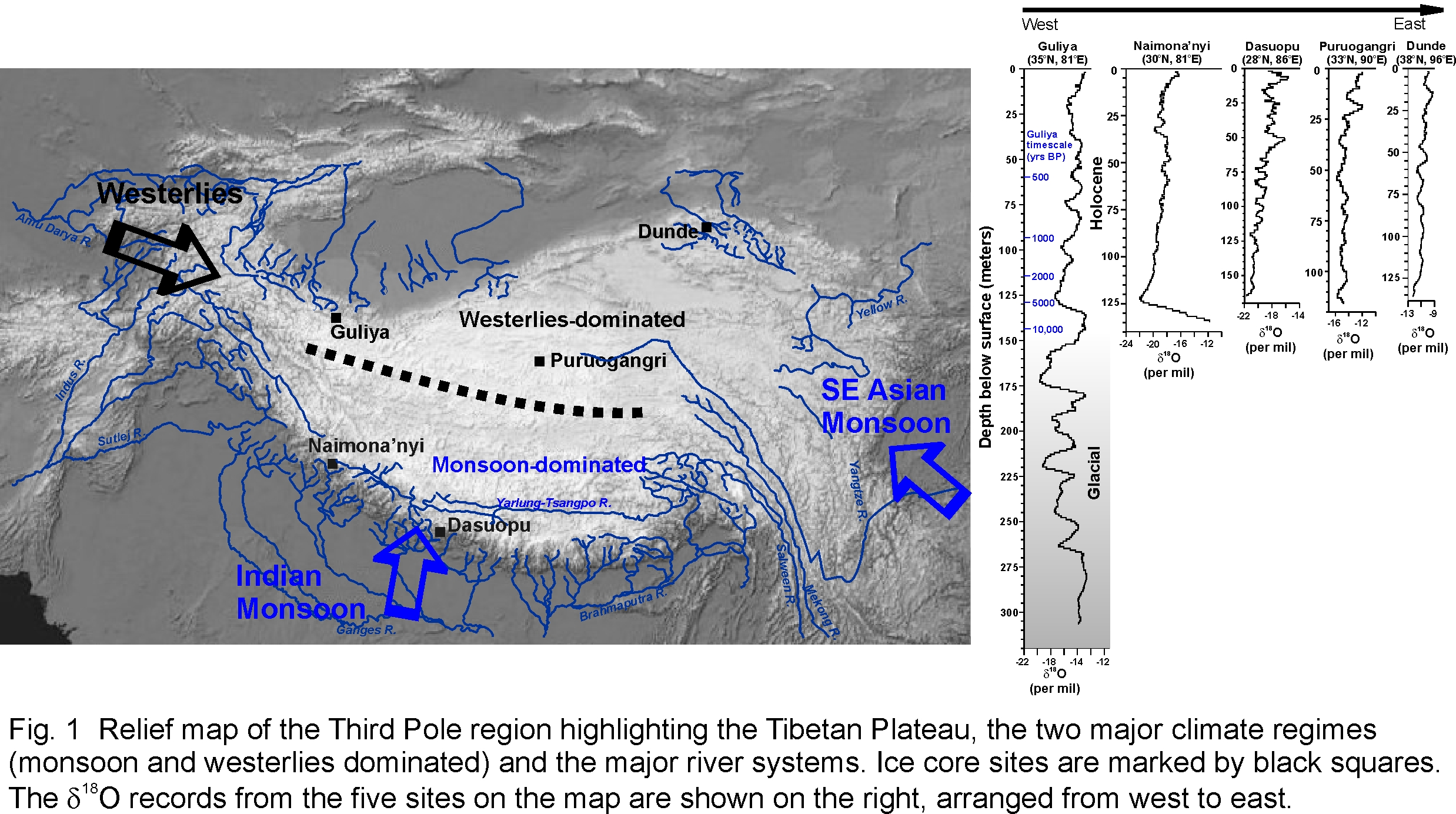