1.3 The Origin of the "Fujiwhara Effect": The Typhoons that Postponed the End of World War II

"Fujiwhara effect" which describes interaction between two close tropical cyclones including typhoons, especially to rotate cyclonically about each other, is one of the few eponyms in meteorology with Japanese name. It is known that this is named for Japanese meteorologist Sakuhei Fujiwhara (1884-1950) who served Director of Central Meteorological Observatory of Japan (present Japan Meteorological Agency) from 1941 to 1947. The origin of this word was investigated by bibliographic survey.
The earliest usages are found in literatures on 1951 (Berger, 1951: Cressman, 1951) and possible usage of “Fujiwhara rule” by Herbert Riehl (1915-1997) in 1950 (Riehl et al., 1951). On the other hand, in Japan this term became a well-known in 1964 among many people including most of meteorologists.
The interaction between two typhoons was first studied theoretically by Diro Kitao (1853-1907) (Kitao, 1889, 1895, 1897) and he presented that two cyclones rotate counterclockwise in Northern Hemisphere around the center of them. That was prominent among the Japanese meteorologists. Fujiwhara published numerous papers, including Fujiwhara (1923), about interaction between two vortexes in 1920's and 1930's with the knowledge of Kitao's studies in style of his own. It looks like that Fujiwhara have interest with growth and decay of vortexes, no interest with rotation direction. The other hand, Bernhard Haurzitz (1905-1986) (Haurwitz, 1930) investigated theoretically rotation of two cyclones based on Kitao’s theory (Haurwitz, 1929).
During World War II, U.S. forces were damaged by typhoons several times including twice devastation of Third Fleet. This was a motive that they established a center for typhoon tracking in Guam in June 1945 that performed aircraft reconnaissance and warning operation in North West Pacific (Guard et al, 1992).
Two typhoons (Susan and Ruth in U.S. name) that progressed slowly in the western Pacific between Okinawa and the main Japanese islands interacting each other, in late August 1945. It was believed that these typhoons postponed McArthur's occupation plan of Japan for 48 hours (Kidd and Reed, 1946, Riehl, 1954). Detailed motion of two typhoons was observed by aircraft reconnaissance. Haurwitz (1946, 1951) analyzed these data with input from Riehl, and confirmed his theory of two cyclone rotation. This case was also introduced in Riehl (1954). However, they never used the term “Fujiwhara effect”.
It is inferred that therefore some experts in meteorological services in U. S. gave this process the name of a chief of meteorological service of the enemy who believes that "Kamikaze" (that is typhoon) is heaven-sent and immortalize Japan, also a meteorologist who had studied interaction between vortexes. But Riehl and Haurwitz must know this “effect” should not be called “Fujiwhara”.
Should we stop to use this term? It's not a problem. It is only a new example of the zeroth theorem (Jackson, 2008).

FIG. Kitao's figure illustrates the trajectory of two cyclones rotate counterclockwise in Northern Hemisphere around the center of them with getting closer (Kitao, 1889). 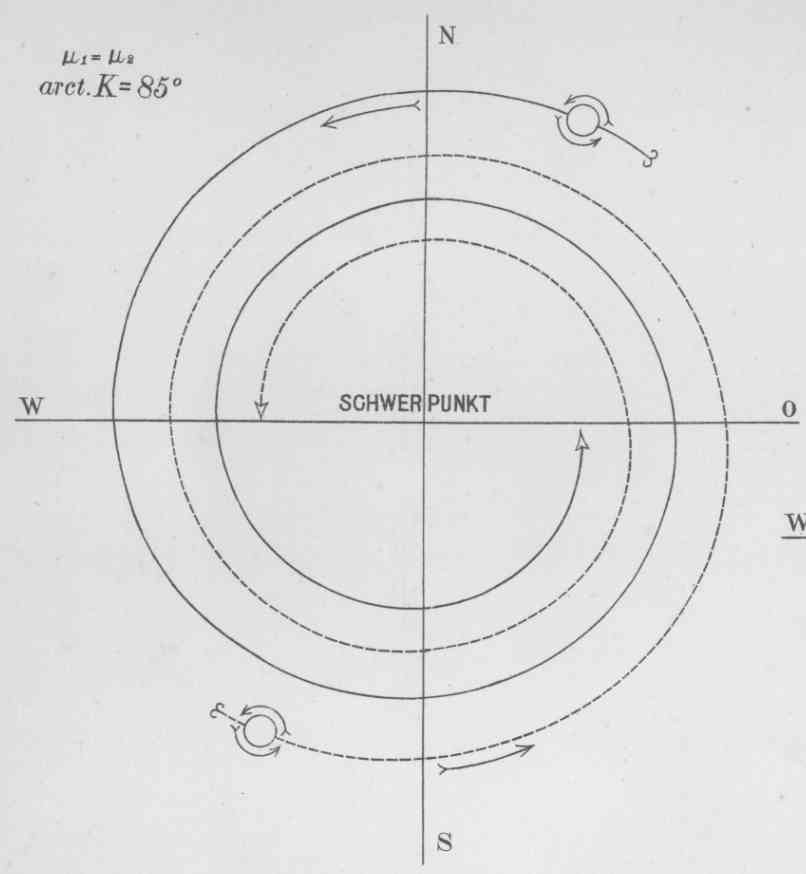