More
Room 6A (ACC) (Austin, Texas)
Belay Demoz, Univ. of Maryland, Baltimore County, Baltimore, MD; and B. J. Carroll, R. Delgado, K. Vermeesch, and D. Whiteman
Recorded Presentation
Several Fixed PECAN Sites were deployed during the experiment. We report on data from a single site in Greensburg, Kansas as referred to as Fixed PECAN site #2 (FP2). FP2 served as a hub for Profiling Microwave Radiometer, wind and water vapor lidars, radio sounding unit, a surface station as well a network of ceilometers. FP2 will anchor the southwest part of the instrumentation side for PECAN. The instrumentation was organized by teams from Howard University, NASA/GSFC and UMBC as well as other collaborators. In addition, the Naval Postgraduate School (NPS), located in Monterey, CA, also deployed a 16 m main tower, a 6 m and 3 m supporting towers, a SODAR, a tethered balloon, and ceilometers. Moreover, NOAA/NSSL deployed an AERI system for part of the experiment.

We will discuss lidar and collaborating data from a selected cases and demonstrate the utility of even the less sophisticated lidar in investigating storm and atmospheric dynamics. The attached figure represents on case study from 14 July 2015. On this date, the wave oscillations occurred at night where there was no developing boundary layer. This case also had two regions of pressure jumps, at 5:30UTC and 7:00 UTC. The magnitude of the pressure jumps recorded was similar but the resulting atmospheric water vapor perturbation and depth was very different. As can be seen from the figure, the low level (sub-1km) water vapor mixing ratio and temperature did not show that strong perturbations, but the upper level 2-3km water vapor wave reveals a strong dynamics. This case revealed a very strong and persistent lofting of the warm-moist near-surface airmass to close to 3km altitude. This lifting of the moist layer was much larger than the previous case discussed (~0.5km). Also not that the simple ceilometer-lidar (CL31) captures the entire oscillations that occurred on this data and were used as a strong motivation to the NOAA/NWS ASOS ceilometer network archiving efforts.

A detailed presentation of several cases will be discusssed and the potential for storm initatition of this bore/wave events will be discussed. In addition, a progress report on the status of the NOAA-NWS effort to create a national network of ceilometers from the Automated Surface Observing System (ASOS) network (which consists of close to 1000 lidar-ceilometers nationwide) will be reported. 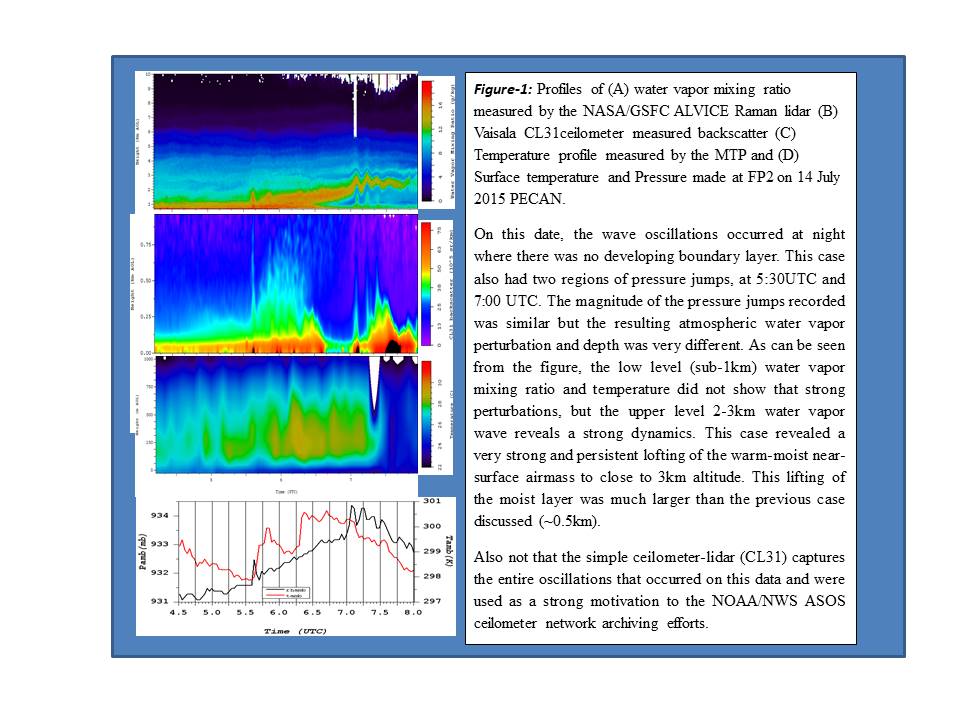