More
Exhibit Hall 3 (ACC) (Austin, Texas)
Xing Zheng, University of Texas, Austin, TX; and D. Maidment, E. M. Boghici, D. Arctur, H. R. Evans, S. Liu, C. Proctor, and N. Gaffney
Recent flood disasters resulting from hurricanes Harvey, Irma and Maria, emphasize the need for rapid, approximate flood inundation mapping over very large areas. Hurricane Harvey alone produced flooding in about 40,000 miles of streams and rivers in Southeast Texas during August and September 2017. A critical piece of information in facing such a huge disaster is a map of the flooded water conditions across the landscape throughout the impacted zone to inform the direction of flood emergency response to people and communities who need help. During Hurricane Harvey, the US Army Corps of Engineers produced flood inundation mapping using classical engineering scale models on the main stem rivers of the region, including the Guadalupe, Colorado, Brazos, Trinity, Neches and Sabine rivers. However, this kind of mapping information is missing for tributaries, which is critical to support flood emergency response for local communities.

In this study, we present our experience of creating inundation maps during Harvey using the Height Above Nearest Drainage (HAND) method. In the HAND method, a 10m HAND raster is created for the entire Harvey impacted zone that quantifies the relative height of each grid cell above the nearest National Hydrograph Dataset Plus (NHDPlus) stream that it drains into. This raster is used to delineate flood prone zones around each NHDPlus stream at different water depths. With a steady flow approximation, a rating curve that converts stream discharge into reach average water depth can also be created from the HAND raster using Manning’s equation. In this way, the HAND method linked to flows computed by the National Water Model was implemented on the Stampede super computer at TACC to create inundation mapping throughout the entire region in real time. These inundation extents are then overlaid with 8.7 million address points across Texas to evaluate real-time flood impact and support search and rescue efforts. Comparison between simulated maps and observed flooding extents at given sites demonstrates that this approach is able to capture the general inundation pattern of fluvial flooding. Considering the urgency of flood emergency responses, this method can be applied quickly to provide an estimate of the flood inundation extent over a very large region. 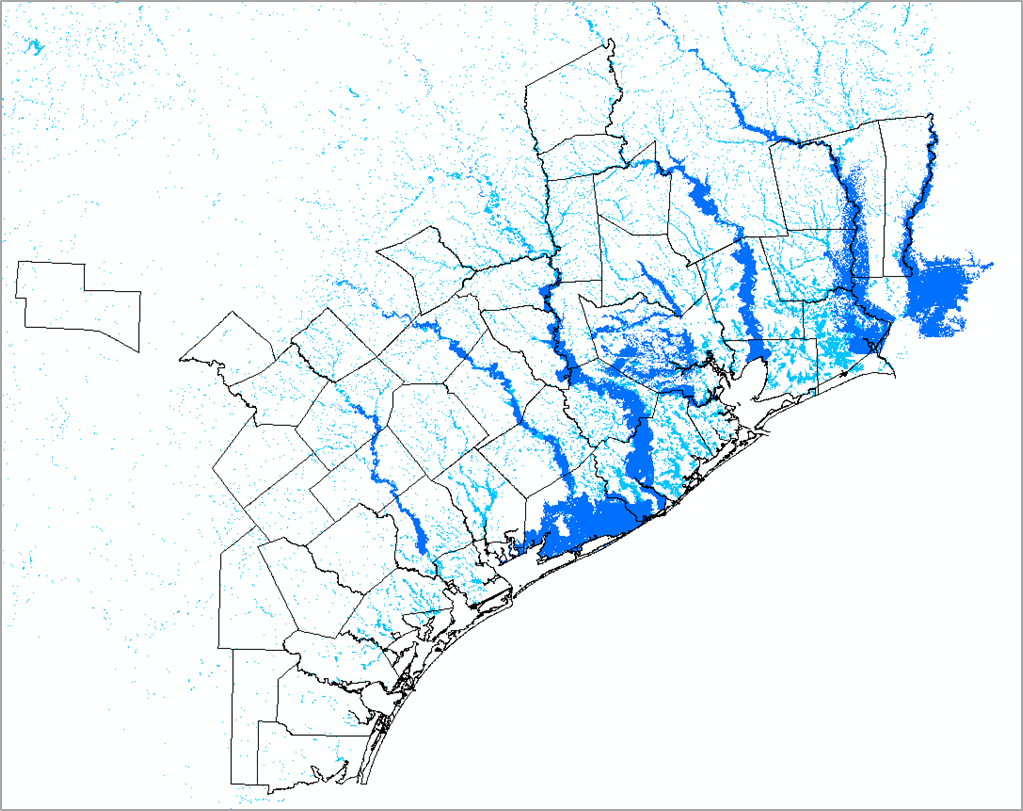