3.6 Comparison of Radar and Ground based Hail Observations During the May 8 Hail Storm in Denver, Colorado

More
Ballroom D (ACC) (Austin, Texas)
V. Chandrasekar, Colorado State University, Fort Collins, CO; and S. K. Biswas, I. Arias, K. E. Willmot, S. Bussmann, and A. Kubicek
This research is an extension of the collaborative research between the CASA project and the Understory Inc., where simultaneous radar and surface observations are used to validate and improve radar inferences. On May 8, 2017, a severe thunderstorm pounded the highly-populated Denver metro area with large hail and strong winds. This is reported to be the most damaging hailstorm in Denver’s recent history, causing roughly $1.4 billion in property damage. Understory’s network of 48 ground-based automated weather sensors in Denver captured over 4,200 individual hail strikes in real time. This hail event was also simultaneously observed by the Denver WSR-88D and the CSU CHILL radar. The understory stations collectively detect and measure the momentum, estimated size, and impact angle of each individual hail stone separated by at least 10 milliseconds, offering an unprecedented dataset with which to understand the complexities of thunderstorm dynamics. At the same time two dual-polarization radars namely the CSU CHILL radar and the Denver National Weather service radar ( KFTG) also observed the same storms from different view angles. Figure 1 shows the radar reflectivity, and Doppler velocity , and hydrometeor classification for the event, showing extensive hail presence. The radar observations are compared against the Understory ground observations in terms of validating and deciphering the various aspects of the hail signatures, including the hail duration maps. The results of this comparison will be presented, along with key metrics for validating and enhancing radar-based inferences. 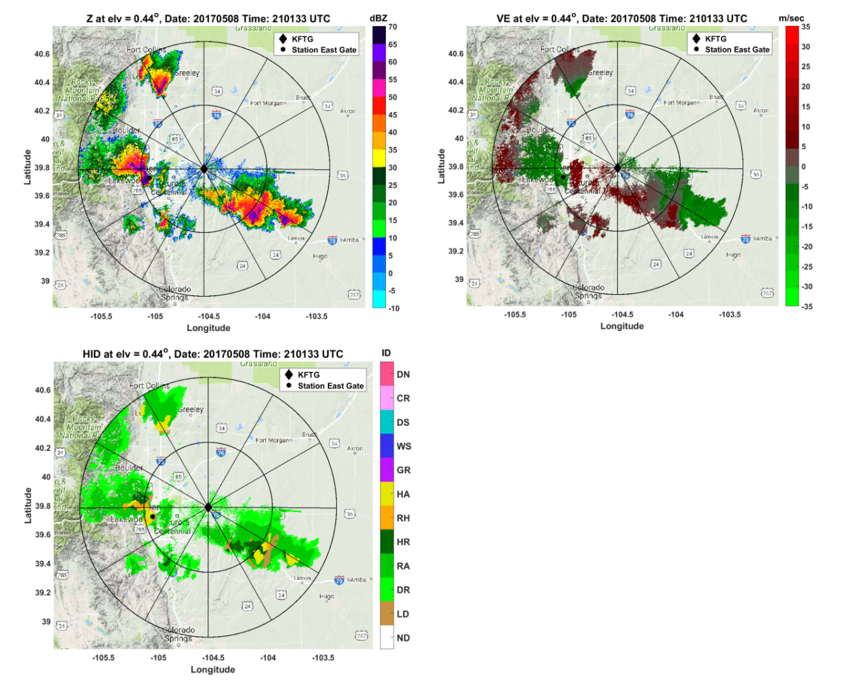