More
Ballroom D (ACC) (Austin, Texas)
David A. Imy, NSSL, Norman, OK; and A. J. Clark
Recorded Presentation
On 17 May 2017, the Storm Prediction Center (SPC) forecast an enhanced threat of severe storms for much of Iowa and southwestern Wisconsin, with a slight chance of severe storms across the remainder of Wisconsin and northern Illinois. The enhanced severe threat was due to an elevated risk of tornadoes and severe hail. And while there were tornadoes and severe hail, the most extensive coverage of severe weather on 17 May 2017 was due to damaging winds. These severe winds occurred due to a line of storms developing in Iowa around mid-afternoon, and then spreading rapidly northeastward across Wisconsin and northern Illinois during the late afternoon and evening hours. This wind event produced numerous wind gusts in excess of 50 knots. Given the widespread nature of the severe winds and reports, along with a damage swath longer than 240 miles, the criteria for a derecho was met. Synoptically, a negatively tilted upper trough shifted rapidly northeastward from the Texas panhandle into western Iowa during the day, along with a surface low and cold front. While the instability and shear was favorable for supercells, the evolution of the derecho was not well forecast by the models or ongoing forecasts. This presentation will examine the meteorological parameters that contributed to the storms evolving into a well-organized linear system and the consequent sustaining damaging wind event. 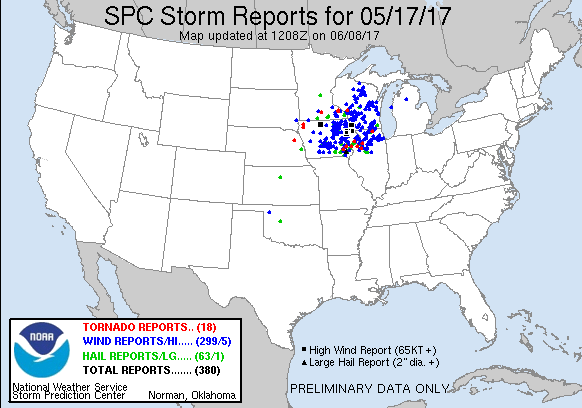